Basic income is a ‘no-brainer’

WENDY ELLIOTT welliott@bellaliant.net @KingsNSnews Wendy Elliott is a former reporter for the Kentville Advertiser and the Hants Journal. She lives in Wolfville. 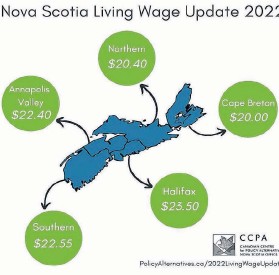 With Zoom, a person can sit in on all kinds of thought-provoking discussions. Recently I took part listening in on a forum organized by the Tamarack Institute for Community Engagement. The institute is located at Waterloo University, but the focus was on a basic income for Atlantic Canada. By definition, a basic income in this region would provide an unconditional cash transfer from governments to individuals to enable everyone to meet their basic needs, participate in society, and live with dignity — regardless of work status. Raising awareness, broadening support and looking at political will among all levels of government could allow for a regional focus to proceed. In Prince Edward Island, an allparty committee of the Legislative Assembly has already recommended a fully-funded, province-wide basic income be implemented. Acting on a general consensus, P.E.I. has called upon the federal government to engage in discussions around its implementation. Newfoundland leaders seem keen as well. Elected in the 2021 Newfoundland election, John Abbott was sworn in as minister with a wide range of social responsibilities. He told us on Zoom that he promotes the concept of a basic income. In October, he announced a new targeted basic income program for youth participating in the residential services program. It will serve approximately 300 youth. On P.E.I., Lennox Island Chief Darlene Bernard noted that government bureaucracy doesn’t want change and acts unwilling to contemplate new ideas that would benefit thousands. Many First Nation communities, like hers, have no problem contemplating the advantage of a basic income. A report by a Halifax-based economic think tank, the Atlantic Provinces Economic Council, suggests providing people with a monthly cheque would result in everyone having enough money to meet their essential needs, including food, housing and clothing. It seems like a nobrainer. Health economist Evelyn Forget, a professor at the University of Manitoba in Winnipeg, told the CBC that basic income would replace welfare and ideally cut out a lot of the complicated red tape. The author of ‘Basic Income for Canadians: from the COVID-19 emergency to financial security for all’ firmly believes in the benefits. This isn’t an entirely new notion. Back in the 1970s, then Manitoba premier Edward Schreyer launched a pilot project called Mincome in the rural community of Dauphin. Executive director Ron Hikel has said, “Mincome provided people with assurance that whatever happens in their life, they will be able to put food on the table and a roof over their heads.” Yet, the feds dropped it after four years. Today a basic income program could cut poverty rates by almost half, according to a 2021 report by the parliamentary budget officer. It would likely be far more simplified and efficient than income assistance. In Ottawa these days, the Green Party supports a guaranteed livable income program and so does the NDP. The Liberal Party hasn’t made any commitments, but there is deemed to be strong support from within the party. The other two parties haven’t said much. No surprise there… Liberal MP Julie Dzerowicz actually tabled a private members’ bill calling for a national basic income strategy back in 2021. It died at the dissolution of parliament. Then a National Framework for a Guaranteed Livable Basic Income Act was brought to the upper house November. by Senator Kim Pate back last It has not completed its second reading yet. It is unlikely that any province in this country has a minimum wage today that is anything like a living wage. The next time you see a job advertisement, note whether the offer is a salary or an amount per hour. Hourly wages are just embarrassing, so Canadians need to talk far more about what a basic income could look like.