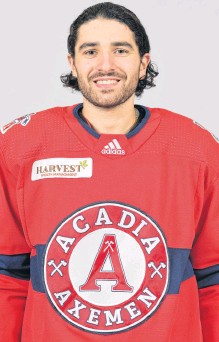 If the struggling Acadia Axemen are to get back on track in Atlantic university hockey, it will be without three key players. The Axemen, who host the 2022 University Cup national championship in Halifax in March but have posted a disappointing 6-12 record through the first half of this season, have lost captain Garrett McFadden, goalie Logan Flodell and forward Maurizio Colella to the pros. Acadia head coach Darren Burns said these were opportunities that were hard to pass up. “When you look at it, the way things have gone the past couple of years, there's a stadium with 18,000 people in it and then across the water there's an empty stadium,” Burns said in a Jan. 3 interview. “It's the sign of the times. There's so much uncertainty and people need to make decisions. “Writers want to write, painters want to paint and athletes want to play. People need to make decisions on their own. For me, I want to make sure that people close to me be happy because the last couple years have been tough on everyone.” The trio signed professional contracts to play in the ECHL. McFadden was leading the nation in scoring among defencemen with 20 points in 18 games. Flodell, an AUS first-team all-star in 2020, had appeared in 14 games this season and had a 3.97 goals against average. Colella had nine goals and nine assists in 30 games. McFadden signed with the Reading Royals and played his first game on Jan. 2, a 5-3 loss to the Worcester Railers. The 24-year-old blue-liner collected 69 career points in 76 games over three seasons with Acadia and was recognized by Hockey Canada in October as a community champion for the month. Flodell and Colella, who were also in their third season at Acadia, inked deals with the South Carolina Stingrays. In his professional debut on Jan. 1, Flodell stopped all 23 shots he faced in a 1-0 shutout victory over the Jacksonville Icemen in Florida. “When guys come to our program, we're here to guide them and advise them and they're going to be treated like our own kids,” Burns said. “They're all important to us. “But in the past couple of years, we've had a cancelled nationals, no season last year and now a delay and back to who knows? There hasn't been a ton of hockey played, so people have to move on, they have to be proactive and they need to make decisions. It would be very hypocritical or egotistical of me to not be supportive. I want them to be happy and I want them to move on and be productive, move forward with their lives and pursue their goals and dreams.” It remains unclear when Acadia and the rest of the Atlantic university conference will begin the second half of the regular season. The AUS announced on Dec. 22 that it would pause all university sports competitions until at least Jan. 19. The conference will monitor and follow public health directives and will have more information available regarding the resumption of the 2021-22 season sometime this month. “We have a group of guys who are coming back and ready to roll for the second half,” he said. “I'm excited to see those guys again and get going. They want to prove themselves and it's no different with the coaching staff. “We hope we get an opportunity to play and move forward.” The Axemen, who have allowed a conference-worst 73 goals through 18 games while only managing to score 46, were hit hard by the injury bug in the first half. They have lost 76 man-games to injury this season. “We have a handful of guys that haven't really got to play that we know are going to be impact players,” Burns said. “It was a tough first semester. We weren't able to get any traction because we haven't had our full team together. We had guys who were playing positions they weren't familiar with and we had practices with just 13 guys. It's been abnormal. But it's been all about building character and getting better. The guys just want to get back and prove themselves. Hopefully, things move forward and we get to play.”