The Acadia Axewomen and the host Cape Breton Capers were ousted on the opening day of the U Sports women’s soccer championship in Sydney. The two Atlantic university representatives at nationals dropped their quarterfinal matches Nov. 18 at Cape Breton University. The UBC Thunderbirds edged the AUS champion Axewomen 2-1 in penalty kicks while the Trinity Western (TWU) Spartans clipped the Capers 4-0. Fourth-year forward Danielle Steer booted the winner in penalty kicks for UBC. Steer was the third Thunderbird to score. Grace Longley was the lone Acadia scorer. The Thunderbirds — Canada West silver medallists — held the territorial advantage in the first half but it wasn’t until the 50th minute when midfielder Aislin Phillips struck a ball from 20 yards out which deflected past Acadia rookie keeper Milena Ramirez. Acadia notched the equalizer — in the 69th minute — when senior wing Jayden Boudreau laced a shot into the top corner. UBC advanced to the semifinals to face the MacEwan Griffins on Nov. 20. Acadia moved on to a consolation Nov. 19 versus the Queen’s Gaels. Results were unavailable at press time. In the later quarterfinal, four different goal scorers paced TWU past Cape Breton. Cat Harvey and Elizabeth Hicks had first-half goals and Anna Dunn and Holly Stiel scored two minutes apart late in the match to pull away. Hannah Miller made five saves for the shutout for the Spartans, who were seeking their sixth national banner. 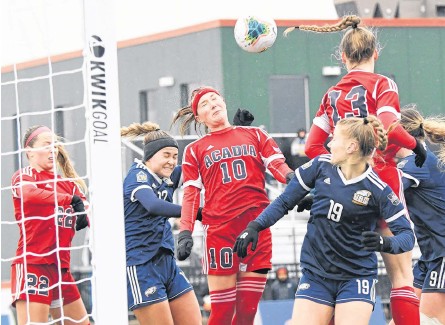