Peach pleased to be joining the Axemen

Bailey Peach will go from playing as far away from home as he’s ever played to competing in familiar surroundings next season. The 20-year-old Falmouth native recently committed to the Acadia Axemen for the 2021-22 Atlantic University Sport season. Peach is playing nearly 6,000 kilometres from home in the Western Hockey League with the Victoria Royals this season. “To get that opportunity again to come back home and give back to my community and play in front of my friends and family, and (have) them be able to come watch me again, is going to be unbelievable,” he said recently from Victoria, B.C. “I grew up down there. I was that young kid that was around the Axemen players. They got me to where I am today, and, hopefully, I can do the same when I get there and help the young kids.” Peach played his minor hockey through the Acadia system and grew up attending Axemen camps. He played the first two and a half seasons of his junior career in Sherbrooke, Que., after the Phoenix selected him 11th overall at the 2017 Quebec Major Junior Hockey League draft. He joined the Charlottetown Islanders for the second half of the 2020-21 season. He got caught in a numbers game in Charlottetown this season but ended up getting an opportunity to play his overage junior campaign on the West Coast. “He’s a real good hockey player and he never complained,” Axemen head coach Darren Burns said. “He kept working. Those are the kids that you want to have in your program.” Burns and Peach go way back. Peach played on minor hockey teams with Brady Burns, Darren’s son. Burns was also part of the coaching staff for a couple of seasons. “Familiarity is always extremely important,” the elder Burns said. “We’ve known that family well and the kid well since he was in atom.” In fact, Peach skated with the Axemen as he waited for his future to get cleared up this fall. “Burnsy and the coaching staff are wonderful, and I can’t wait to join the team,” Peach said. Burns called Peach “a very mature, well-spoken, honest kid,” which are important characteristics for the coach. “If he’s not performing to his capabilities, he’s the kind of kid who will look you straight in the eye and say he knows, and he’ll get better. I like that,” he said. “We think he’s going to be an impact player in this league, and we think he can keep getting better and better.” Peach said he has great teammates, coaches and billets in Victoria, and the team is working to improve each day. His ultimate goal is to sign a pro deal after the season, but he is excited to know he will be an Axeman if the right pro opportunity doesn’t present itself. Peach isn’t the only addition the Axemen have announced for their recruiting class for the 2021-22 season. Acadie-Bathurst Titan forward Liam Kidney, an Enfield native, has also committed to Acadia. “We’re ecstatic about him,” Burns said. “We love him. He’s going to be a steal in my books.” Kidney and his younger brother Riley, also a Titan, attended summer sessions at Acadia and were part of spring teams that competed in the Portland, Maine, and Boston, Mass. The 20-year-old winger has four goals in 10 games this season with the Titan, his fifth season in the QMJHL. 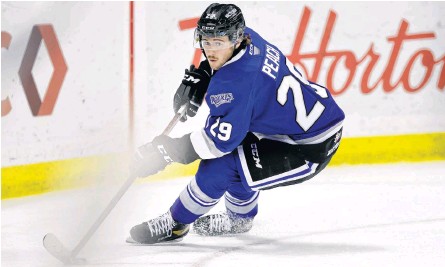