Windsor town council • agreed to allow the local fire department to carry the new Jaws of Life rescue equipment aboard pumper No. 2. This decision was made after firefighter Fred Fox said using a station wagon to transport the equipment was not the safest or most reliable option. Windsor’s council was • looking to purchase the Smith Coal and Oil property on Water Street from the Business Improvement District Commission for $80,000. Uniacke House, which • was once home to Nova Scotia’s attorney general Richard John Uniacke, was designated a provincial heritage property and a plaque was unveiled at the site. Club Incognito officially • opened in downtown Windsor on Gerrish Street. The drug- and alcohol-free venue was a nightclub for teens. A tribute appeared in • the Hants Journal honouring Dr. Charles Hines, “the most loved man in Cheverie,” on his retirement. Hines served shore residents for more than 32 years. Community members presented him with a motorboat and colour television at his retirement celebration. The Hants County Meals • on Wheels program launched in Windsor. The meals, prepared by staff at Dykeland Lodge, were to be delivered every Tuesday and Thursday to area seniors or those who cannot prepare meals for themselves due to mental or physical challenges. Windsor Regional High • School had 110 students graduate; King’s-Edgehill School graduated 46, West Hants Rural High School graduated 83 and the Hants Regional Vocational School graduated 78. The Maritime Rodeo Association • announced plans to have the circuit stop in Windsor for the first time in its history. The other Nova Scotian stops were Halifax and Yarmouth. The 1986 Nova Scotia • karate team experienced its most successful national competition in the 14 years that the Black Belt Karate Championships had been held. The team won 10 medals; one gold, one silver and eight bronze. On the team was Windsor’s own Dave Griffin. Almost 100 competitors • took part in the Lazy Man’s Triathlon, held at Ski Martock on July 1. Participants ran 3,000 feet down Ski Martock, biked three miles to Sangster’s Bridge and either canoed or sailed four miles to the Windsor waterfront. Andrew Beazley won the individual race while the group of John Riley, Chris Bridges, Tim Lynch, Paul Curry, Artie Crowell and Brian White took home first place in the team event. A two-vehicle collision • involving a car and a motorcycle that happened along Chester Road resulted in the passenger of the bike dying and the driver being transported to hospital with injuries. Sgt. Quentin W. • Wenaus, who had 24 years of service, took over as the commander of the Windsor RCMP detachment. Sherri Walker placed • first in the doll carriage class at Hantsport’s July 1 children’s parade. She created a “very attractive summer wedding” scene. The community was • celebrating Col. Charles F. Sanford’s military news. He was born in Summerville in March 1922 and joined the RCAF in September 1940. After quite a successful career, in 1971, he was appointed as the Canadian National Military representative to the Supreme Headquarters Allied Powers Europe, Brussels and Belgium. Irving Oil Company’s • bulk plant in Windsor successfully appealed the town’s assessed property value of $200,000 by $95,000. Bon Vivant products, • which were found primarily in gourmet food sections of grocery stores, were being recalled due to botulism. The soups and sauces were produced in the United States. Eight-year-old Christopher • Aker, of Three Mile Plains, was named best camper while attending Camp Evangeline at Debert. There were 300 boys and girls participating in the Pentecostal Assemblies of 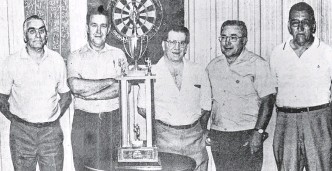 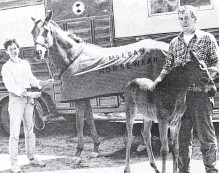