Valley Rugby Union’s men’s team win one, lose one as they start the season

It has been more than a year and a half since the Valley Rugby Union’s men’s team took to the pitch for competitive play — but fans wouldn’t know it by watching their recent performance. The team swung back into action this month with two bouts, losing the first by just five points, and easily winning the second by 45 points. Axel Lawrence, who is copresident of the Valley Rugby Union and is also the captain of the men’s team, said it felt good to be back playing. “It was so much fun. I think that’s how everyone felt, regardless of the result (of the home opener). I know we lost but everyone was just really happy to be back out on the field,” said Lawrence. The men, wearing new team jerseys, lost the July 7 home opener against the Halifax Tars by five points — the final score was 15-10 — but rebounded considerably three days later when Riverlake visited. The Valley squad won that match 50-5. The men’s team is playing in Division 2 this year instead of Division 1. Lawrence said the team is comprised of a good mix of new and returning players. “We have a mix of players that are pretty new to the game, with just a little bit of high school rugby experience, and a bunch of players who played for the senior men’s provincial team. It’s a pretty good mix on the team with youth and veteran experience,” said Lawrence. “With the decision to go Division 2, we feel that we have a really good shot of actually potentially winning that division or being near the top at the end of the season.” The men were scheduled to play in Charlottetown July 17, then in Enfield on July 24 and in Port Williams, at Benedict’s Field, at 2 p.m. on July 31. They have three games to wrap up their summer schedule — Aug. 14 in Sydney against Caledonia, Aug. 21 in New Glasgow against Pictou, and Aug. 28 3 p.m. at in Windsor, at King’s-Edgehill School, against the Truro Saints. The finals will be held Sept. 11, with the location and time still to be determined. Lawrence said the bulk of players with the Valley Rugby Union reside in West Hants and the Wolfville area, but some travel in from the city or further down the Annapolis Valley to compete. Since starting the season, Lawrence said one of the highlights has been to see the team gel and have the new players really make an impact. “We had a handful of new players playing their first game with the club, and their first game of senior men’s rugby. I thought they made a seamless transition and made an immediate impact to the team,” he said. The first two games drew quite a crowd to King’sEdgehill School. Lawrence encourages people to stop by and check out the sport. “It’s a pretty fast-paced sport. There’s not a lot of stoppages. For those who like contact sports, obviously there’s lots of contact,” said Lawrence. “For anyone who has never watched a rugby game or experienced a rugby game, I would highly encourage them to check it out and see what it’s all about and potentially get involved if they see what they like.” Lawrence said the Valley Rugby Union is working on developing a love of the sport among youth. They currently offer rookie rugby and intro to rugby programs aimed at youth between the ages of five to 15 years. “We’re trying to offer rugby programs for kids of all ages.” For more information on the club, the men’s and women’s teams, or the youth programs, email valleyrugbyunion@gmail.com or visit their social media pages @ ValleyRugbyUnion. 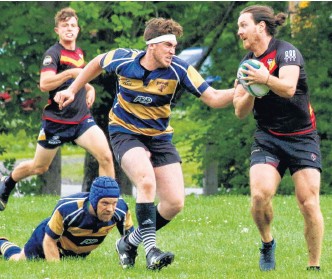