A unique athlete with a ‘terrific’ outlook, meet Julia Cameron 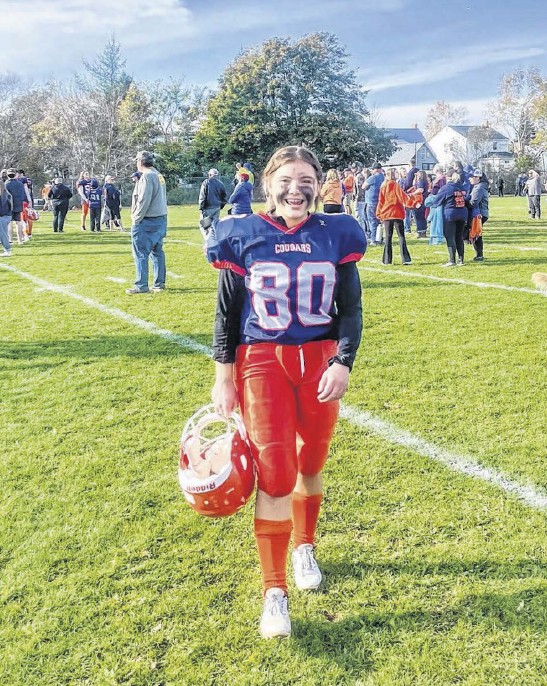 TRURO — Representing Cobequid Educational Centre, the Cougars ended another football season in early November. After finishing third during the regular season, the Cougars lost out in the playoff semi-finals to Auburn High. ‘The boys’ football team,’ as it is sometimes called, featured a female player this season. We enjoyed talking with Julia Cameron for this week’s column. Cameron’s high school athletic involvement has been very interesting and has included being a member of both the CEC boys varsity football team and the CEC girls varsity basketball team. She was a receiver in football and plays wing in basketball. “You had to prioritize the ‘in-season' sport, so football was my priority,” Cameron, 17, of Valley, explained. “Once the football season was over, I became fully committed to basketball as a senior on the team. We’re in the early part of the basketball season with provincials taking place in March, so we have lots of time to prepare.” Cameron revisited the 2021-22 school year when she was in Grade 11 and participating in track and field. “I occasionally watched the CEC team play football and I remember watching CFL and NFL football on television. I think I was reminded of the passion I had for football when I was younger.” And there were other factors that helped peak Cameron’s interest in playing high school football. “There had been girls who had played football for CEC before, this kind of encouraged me. I wasn’t afraid to try out or to be judged. I am also a big fan of country music and of Tennille Towns who produced a video with the purpose of inspiring women, one of which is a kicker with a college football team. “Her name is Sarah Fuller, and I found it pretty cool that on the back of Sarah Fuller’s helmet, it said, ‘play like a girl.’ I found this pretty special, it was inspiring. When I made the decision to play football, it didn’t matter that I was the only girl on the team.” So, following tryouts, there Julia Cameron was - a member of the CEC Cougars football team. “I had played a lot of sports, but I don’t think I played any sport where a team gets as close as in football,” Cameron said. “We practiced every day regardless of the weather, a team goes through a lot of ups and downs, but there were a lot of players to lean on. “Three-quarters of the way through the season, one of our players Jase Langille got hurt. Seeing the team come together to play for him, I thought it was really cool, it was pretty special.” Cameron shared that Jase, who suffered a broken leg, is now progressing well. “Playing with the Cougars was a big difference from playing minor football, the guys got bigger,” Cameron said with a smile. “I think my doubts about playing all went away when I was surrounded by guys who I had played with before.” In attempting to digest Cameron’s many accomplishments in sports, “how did it all start,” seemed like the obvious question to ask. “Growing up with my dad (Scott Cameron), he played so many sports. Football was always on TV, it was so competitive at our home that we used to yell at the television. Sports seemed to do something that brought us all together as a family.” From six years of age, basketball was a key sport for Cameron. This led to her to first playing for the CEC Cougars girls basketball team during her Grade 10 year. From playing minor football, she also went on to play for the Cougars boys team. A school highlight, not to be missed, took place during Julia’s Grade 11 year when she and fellow student Jaeger Laird were presented with the Lieutenant Governor’s Medal, a wonderful achievement. During the recent interview, Julia spoke of her mother Denise and shared that her 16-year-old sister Alexa is a golfer and plays hockey for two teams, including CEC. Julia told me about her interest in healthcare and shared a desire to see healthcare more assessable to everyone in Nova Scotia. Julia also has a passion for helping mental health and has had past involvement in fundraising for charity. In looking ahead, Julia said she might follow ‘a lead’ by her dad and grandmother Dorothy Cameron and attend Mount Allison University. She is interested in studying psychology. But, for the present, Julia is concentrating on her Grade 12 year at CEC, which of course includes helping lead the girls basketball team to new heights. Worth Repeating is a weekly column touching on stories from the past, life experiences and events from the present day. If you have a column idea, contact Lyle at 902 673-2857.