One year later: Debert fire victim speaks on ‘getting back to normal’ 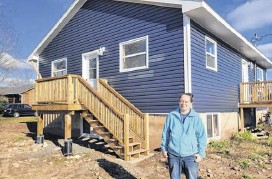 DEBERT — It has been just over a year since Heather Clare and her three children narrowly escaped their burning home with their lives. Clare has vivid memories of that day. It was Oct. 12, 2021. She was awoken at 5 a.m. to the sound of the fire alarm. Leaving the bedroom, she came face-to-face with a wall of smoke. She shouted out to her kids, warning them of a fire. After grabbing her robe, she heard her children yell back that they couldn’t go down the stairs — the heat was unbearable. “The fire had started in the laundry room, which was at the bottom of the stairs,” Clare recalled. “It trapped us upstairs.” As the children began to panic, Clare called 911 and told them they were trapped in the house. It was then that Clare knew she would have to do something drastic. “I could feel the heat starting,” said Clare. “When the heat started, I knew we had to get out.” Clare and her children took refuge in her son Joshua‘s bedroom. She tried to open the window, but the house was so old (170 years) that it would not stay open. Instead, she shattered the glass. “I told the girls we had to jump, and they were scared, so I went first thinking I’d be able to break their falls,” said Clare. “My son went second, then my two daughters.” “It was very harrowing, quite a few injuries, thankfully most of us managed to come out of it without too much lasting effect.” Though the family survived the ordeal, they lost several pets in the fire, including a litter of six puppies and a cat. Clare’s daughter Allana suffered the most. Along with post-traumatic stress disorder (PTSD), she had a compression fracture and burst fracture in her back. “The burst fracture left a sliver of bone really close to her spine,” said Clare. “They had her in a full-body brace for three months. She managed to get out of it just after Christmas (last) year.” Clare and her other daughter suffered compression fractures in their spines. Clare had a sprained ankle and a deep cut on her leg that required stitches. Her oldest daughter, Emily, ended up with a minor fracture in her wrist. Joshua sustained a few scratches. AFTERMATH “I took care of the kids first,” said Clare. “I made sure Allana had counselling, that everyone was getting to their medical appointments and everything … kind of neglected my own issues for a while until I made sure everyone else was looked after.” “I eventually found a counsellor as well, because I suffered from PTSD before this ever happened,” she continued. “It just made it worse.” Clare’s family has moved into their newly constructed home as of mid-september, nearly a year since the fire. It was built on the foundation of the old one. “We make it through,” she said. “The insurance wasn’t great; we didn’t have a lot of money to build with. They paid the mortgage, and that was all they did, so we had to go out and get a second mortgage to build this place.” Despite the challenges she and her family faced, Clare was thankful for the charity they received. “My husband (Kenneth) and a few friends and our family members really poured their hearts into this place to get it together for us,” Clare explained. “We had some people who volunteered their time who were contractors, which was awesome.” “A couple of companies in the area gave us some discounts on some stuff and helped us out that way. We had beautiful outreach from the community. They’re an amazing community. We had so much stuff donated to us in the first couple of days, and they raised about $60,000 for us.” Allana’s school, Bridgeway Academy, set up a Gofundme page that successfully raised $8,115 for Clare’s family. Coun. Marie Benoit, who represents the Debert area, spoke of the community’s efforts to help Clare’s family after the fire. "I'm not surprised by the community involvement in terms of help and donations and such," said Benoit. "Unfortunately, we seem to have tragedies happen, more than we wish, but when they do happen, I just feel like, if it's a 50-50 board or looking for clothing donations, or if it's looking for items for somebody rebuilding or restarting because of a house fire ... people just want to help however they can." The family opted to build a one-storey. While it was under construction, Clare and her family lived with her husband’s parents. Clare stated they experienced “the bad end of both sides of it” when it came to finding a new place to live. “When it happened, the housing market went through the roof, and you couldn’t get contractors, and you couldn’t get supplies, and the supplies that you did get were very high-priced,” said Clare. “Now, we're looking at moving from a construction loan into a mortgage, and we have issues with interest rates, and the housing market declining,” Clare continued. “You couldn’t have asked for worse timing.” Though her house troubles have not ended, Clare opted to end on a positive note. “It’s stressful, but it’s getting there … it’s nice to be home.” One thing that has made Clare and her family more comfortable in the wake of the fire is their two rottweilers, who were half-sisters to the one they lost in the fire. They were also able to get new cats. “It was really good to get them, to be able to have pets again,” said Clare. Through all the trials and tribulations that her family has faced, Clare’s family is recovering. “Things are getting back to normal,” said Clare. “As normal as can be.”