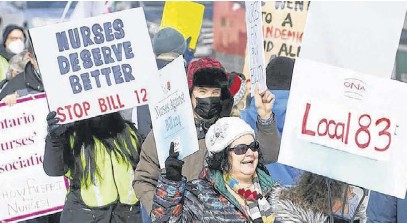 Countries around the world are barrelling towards a health workforce crisis. Driven by unrelenting waves of COVID-19, poor working conditions, inadequate pay and a host of other factors, health workers in many countries, including Canada, are exiting the workforce in unprecedented numbers. The World Health Organization has long raised the alarm regarding health worker shortages. It estimates a shortage of 18 million health workers by 2030, primarily in low- and middle-income countries. These countries’ shortages are made worse because health workers are leaving them to fill growing vacancies in high-income countries. The global health workforce crisis is further complicated by burnout and absences due to COVID-19. Health workers have not been silent in the face of these issues — far from it. The past decade has brought an increase in health worker protests, particularly in low- and middle-income countries. As researchers we were keenly interested in why health workers were protesting with such frequency during the early months of the pandemic, despite much public recognition as heroes and warriors. To answer these questions, we used the Armed Conflict Location & Event Data Project (ACLED), a global database on political violence and protest. Our team systematically analyzed 6,589 health worker protests that took place between March 2020 and March 2021. Here are our key findings: This period saw a major increase in health worker protest activity. Nearly 6,600 protests took place in 149 countries during the first year of the pandemic, a quantifiable increase from the previous year. The 85 countries included in the ACLED data in both the March 2019-20 period and the March 202021 period experienced a 62 per cent increase in health worker protest activity (from 2,416 protests to 3,913 protests). Health workers primarily expressed concerns about their rights as workers. By far, the largest category of protests during this period were those related to working conditions and compensation. Around 66 per cent of protests concerned health worker dissatisfaction about issues such as occupational hazards, unpaid wages, risk allowances and job security. PPE was only one of many health worker concerns during this period. Surprisingly, personal protective equipment (PPE) concerns — an issue covered frequently in the media — motivated a relatively low percentage of the protests (less than nine per cent). Health workers used protest to highlight longstanding health system issues. Sixty-two per cent of protests about health system problems during this period were about issues that were not coded as directly related to the COVID-19 pandemic. Health workers instead highlighted problems such as the quality of care and facilities available to the public and health disparities. Similarly, the vast majority of health workers’ protests around public policy — another major area of protests activity — were not about pandemic-related government policy, but about social issues like climate change, immigration, police brutality and elections. In the third year of the pandemic and an ongoing and escalating health workforce crisis, evidence of health worker frustrations is now particularly urgent. These workers need more than public expressions of solidarity — they require adequate and timely remuneration and benefits, decent working conditions, workplace protections, safety and adequate resources to perform their roles. In many ways, the demands expressed by health workers mirror demands by the accelerating labour movement across the United States, where frontline workers at major companies are using collective action techniques such as workplace organizing, active use of social media — and other virtual tools — and coalition building to demand better conditions and improved accountability. Looking to the future, it is imperative that we match our public expressions of appreciation for health workers with policies that provide dignity in the workplace, decent working conditions, appropriate remuneration and strengthened systems of accountability. Failing to respond to the dissatisfaction expressed in these protests risks escalating the health workforce crisis into catastrophe.