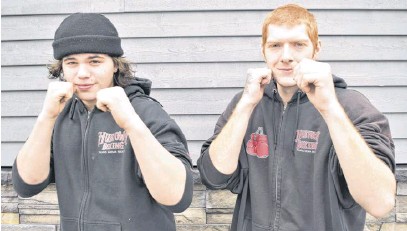 SALMON RIVER - After a nomadic period following losing their Hwy. 311 base of operations more than a year ago, Hubtown Boxing Club is ready to celebrate its new Salmon River location. “We’re having a grand re-opening, and all are welcome,” said Darrin Mosher who runs the club. The event takes place this Saturday (May 14), starting at 11 a.m., at the club’s new home located at 35 Gasper Cross Road, which is off East Prince Street, not far from the Harmony Road intersection. Mosher said there will be a barbecue going on along with beverages, kids can visit with goats a friend is bringing over and, of course, there will be boxing demonstrations with Hubtown Club athletes sparring. “We have boxers from all over the Maritimes coming in,” Mosher said, adding that includes some notable boxers who will be there to meet and greet visitors while displaying championship belts. He said people can look forward to meeting super middle champion Laurie Grosse as well as Ricky Anderson and Charlie Beals. CLUB ACTIVITIES Mosher said the club has been around the Truro area for more than 50 years but a number of those under a different name, adding Colchester Boxing Academy is one many people will be familiar with. “A lot of big people have gone through here,” he said of the non-profit club. “I run the club and have been for years. Then we have some amazing volunteers. Everyone who comes in, it’s out of their pocket, their own time … we’re a real tight family here.” The club is run through membership dues and fundraisers. Its Facebook page contains plenty of information and Mosher welcomes people interesting in joining to call him at 902-956-0063. The club runs a program for youth, ages six to 12, Monday to Thursday, starting at 6 p.m. each evening. “It’s a very successful class for us,” Mosher said. “We have a lot of kids come to that and many are amazing little boxers. They’re learning and it’s a great privilege to be able to do that – teach them.” At 7:15 p.m., the club opens for its regular boxers who train until close which is around 9 p.m. Friday evening is a special one that starts with open boxing from 6 to 7:15 p.m. before becoming an adult ladies-only session, which is new and becoming quite popular. Michelle Hanna said a friend of hers’ shared the Facebook post about the session. “I got brave enough to go and I love it,” Hanna said. “It's fun, good exercise, and builds self-esteem.” Mosher said building confidence is a big part of what the club does for all participants. “I’ve seen a big change in the ladies who come to the class. Some went from not wanting to work out in front of other people to now where they come in and have the time of their lives. They laugh, get along, and work out at their own pace doing only what they can. “Then, boom, you’re building self-confidence, self-worth, and growing as people. We thrive on growing the individual … bring them out of whatever they’re going through.” Jeremiah Mosher is a sanctioned, heavyweight boxer with 14 fights under his belt. He talked about originally getting into boxing because he was being bullied as a youngster. “I thought being known as a fighter, no one would mess with me,” he said. “And I decided to stick with it … I love it.” His enthusiasm for the sport rubbed off on friend Brandon Cook who recently joined Hubtown. “I’m loving it,” Cook said, adding he appreciates the coaching found at the club. “They put the time in, make sure you’re going in a good direction.” Jeremiah echoed that point. “They’re not just telling you, ‘Go do this, go do that.’ They’re doing everything with you … very involved.” Mosher talked about the approach he and fellow volunteer coaches take at Hubtown. “Every boxer is different, every person is different; we’re all trying to do the same thing but the beauty of it is all our coaches are unique and have their own angle to reach athletes,” he said. “Some have a martial art background, some a boxing background, or a street fighting background; we bring that culmination together and it makes it unique.” He said he teaches people to feed off all the advice and instruction and take from it what works best for them. “Wade through it and create for yourself, to become that unique individual. And, really, that’s life, not just boxing,” he said. “We always teach more than boxing. A boxing club is a place of respect, there is no drama allowed. You come in those doors you’re there to be part of the family; to work out, communicate, and make it all work.”