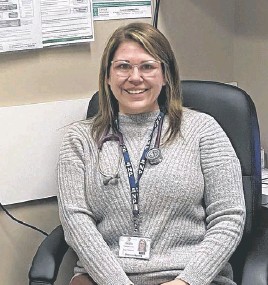 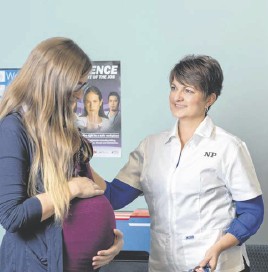 Nurse practitioners are among many health care professionals who work hard — and work together — to ensure patients get the quality care they need. A nurse practitioner (NP) is a registered nurse with additional education and nursing experience. While the scope of practice varies in each province, an NP typically can perform tasks like order and interpret tests and prescribe medications, according to the Canadian Nurses Association While nurse practitioners have played a role since the 1960s, there has been significant growth in the number of practicing NPS over the past decade. This includes Santina Weatherby, an NP from River John, Nova Scotia. Weatherby said her decision to become an NP came while working as a registered nurse at a diabetic clinic. It was apparent to her that she could provide a higher level of care to her clients, but legislation prevented her from doing tasks like writing prescriptions, which could only be done by a physician or nurse practitioner. “There’s so much more I could do with a client as a nurse practitioner,” Weatherby said. When Weatherby went for her Master of Nursing degree in 2013, there were few jobs for NPS in the province. “I was fully prepared to take this program ... with little prospect of a job in rural Nova Scotia,” she said. But Weatherby did land herself a job in Pictou County, and the demand for nurse practitioners has gone up throughout the province. “There’s always jobs posted,” Weatherby said. While Weatherby said nurse practitioners are not a replacement or substitute for any other health care provider, she does say that primary care NPS are an important part of rural health care, where there is often difficulty in recruiting family physicians. Newfoundland and Labrador has also seen a rise in NPS. Nurse practitioner Shannon Murphy entered the field after a stint at a clinic in northern Labrador. Murphy points out that both NPS and RNS were working within a greater scope in the remote area at the time, compared to what they would normally do on the island. “The clinic was staffed by RNS and NPS, with physicians who would visit, generally, every four to six weeks,” she said. “There were no full-time physicians on the ground, so the NPS and RNS were running the clinic.” Murphy now works as an NP in Bay Roberts, about an hour from St. John’s, and is also the communications director for Newfoundland & Labrador Nurse Practitioner Association. She said the provincial government has pushed for more nurse practitioners, especially in the primary care sector, and the advent of collaborative care centres means health professionals are working together to ensure the best care possible for patients while reducing the need for patients to use the emergency department or the 811 services. “I think having nurse practitioners and physicians working together increases access to health care for patients,” Murphy said. “It helps in patients getting seen more quickly and reduces the number of people without a health care provider.” Murphy said many patients appreciate the fact that NPS do not have the same time constraints family doctors and other professionals may have. It happens often that an NP may spend up to 30 minutes with a patient. “We care for patients through their lifespan, from newborns to the elderly,” Murphy said. In Prince Edward Island, Linda Brown’s experience mirrored that of Murphy and Weatherby, in that she also wanted to do more with the health care knowledge she had. Brown, who previously worked in emergency and intensive care settings in Ottawa, wanted to make a change. “I was tired of seeing people in the ICU who were really sick when, if we had adequate primary care, they probably would not have been in the ICU in the first place. I wanted to be able to do something more than just treat them when they get sick.” When Brown began practicing as an NP in 2013, there were only six nurse practitioners in the province. There are now 82, more per capita than in any other province in the country, according to Brown. Brown, who works for Health PEI, said that an NP’S training focuses on health education and promotion, and part of that also involves being a supportive listener to patients with concerns. “My favourite thing about being an NP is when people come in and don’t understand their disease process or how they’re feeling. As we develop a relationship, I can help them better manage their conditions, their fears and worries, so they can live better lives.”