Marks return to performing since COVID 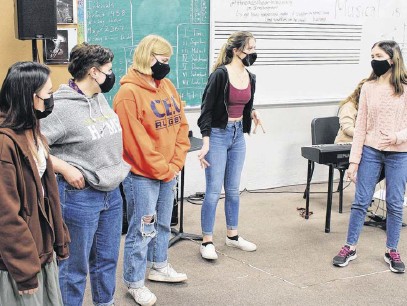 TRURO - There aren’t a lot of things that stand the test of time, says Sheena Henderson, director of the Cobequid Educational Centre’s Encore! 50 Years of CEC Musical Magic. Many schools are taking this year as a chance to rebuild coming out of the COVID pandemic by performing reviews of past musicals, but the 50th year is a special occasion being marked by CEC as it returns to performances since the start of COVID. “We’re really looking forward to bringing something similar to what Truro was used to but a bit different as well,” said Henderson. “And I’m really looking forward to the opportunity to feature so many people, some of whom would never have gotten that opportunity before.” Fitting in as many musicals as possible, the team touched base with past music directors, alumni and rewatched old videos. The songs are from a variety of genres and CEC musical eras with a loosely connected plot scripted by drama teacher Rob Lutz. CEC was just one week out from the musical We Will Rock You before COVID shut the world down in March 2020. “It’s good to be singing with people who want to sing again,” said Grade 12 student Jakob Terry. “At the same time, there’s a lot that we didn’t get a chance to do and there’s always that feeling of like, OK, well, this is our first and last high school show, so let’s kind of put everything we have into it.” He and Grade 12 Marly Maceachern have some history with Spotlight, junior productions and Neptune, but this is their one and only chance at a mature high school musical before graduating. “I think it’s definitely something you want to end with a good note on – literally,” said Maceachern. Henderson was involved in musicals as a student at CEC 25 years ago. “It seemed like such a longstanding tradition then, and to know that it’s double that now is pretty amazing to be a part of,” said Henderson. Music director John Macleod attended school in Stellarton, but his father, a former math teacher at CEC, always encouraged him to see the musicals growing up. Macleod was impressed by the quality of musicals, such as Jesus Christ Superstar, Chess and Cats. “It’s incredible to have that longevity, and especially the support from the community,” said Macleod. “It’s been a big part that people still come out to these musicals, and it’s one event in the school, that, it doesn’t matter really who you are, there’s a role for you somewhere in this production either on stage, ushering sound lights, moving equipment, building the sets. It’s one of the events in the school (that) every part of the school is involved in somehow.” Maceachern’s sisters were involved in the musical and she knows people all over town who were involved. “I think it’s crazy, because we’ll be singing all the songs that the past years have sung and they’ll just be sitting in the audience rewatching it, which I think is really cool,” said Maceachern. “What we’re doing really, I think, will connect our town more because it’s like a past – it’s like their childhood basically just redone.” This is the first musical performance since COVID. For some of the students who have had less opportunities to act, this is their first major performance. Many students are performing the songs they auditioned with, making the review a unique opportunity to fit the show to the students and not a constrained plot. “You kind of get a snapshot of each of each character,” said Terry. “And you get to portray them for the minute and then we go change into another character. It’s weird to wrap your brain around, but it’s fun.” Maceachern said acting out a variety of characters has been challenging. “In one of my songs, I have to act really sick, like I have a cold, and I can’t sound like I’m good at singing,” said Maceachern. “And then in another one, I have to sound good at singing. So it’s definitely different, but it’s fun.” And without major lead parts in the review, the small cast of 27 will be carrying lots of responsibilities. The 20-member pit band, which includes returning alumni and features a wide variety of instruments, will accompany the singers. The flexibility of the review offers some students the opportunity to take part in both the pit band and on-stage. It can be hard getting everyone in the same room too, especially with high COVID cases keeping people home. But the group is persevering, and students have been busy meeting up to practice during lunchtime. “The vibe is a little different, I think, because people are a little less used to interacting with each other even,” said Henderson. “Not even getting on the stage yet. Just watching them try to get together as a cast and get to know each other is a little more awkward than it used to be, but they’re having so much fun.” There will be four shows from Friday, May 20, to Sunday, May 22. Evening performances are at 7 p.m. and there is also a 2 p.m. performance on Saturday. Advance tickets are available at Macquarries Pharmasave and online at Ticketpro (adults $15, students/seniors $12). Costs are an additional dollar at the door.