Search is on for former baseball champions 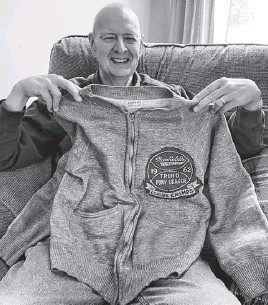 Players with the 1962 Stanfields Truro Pony League team, are you out there? A recent telephone call from Graham Geddes has led to some exciting findings. Graham, a former RCMP officer who resides in Truro, told me about his brother Jeff (who lives in Ontario) being interested in information on his former Truro baseball team and individual teammates. Telephoning Jeff Geddes also a retired RCMP officer - at his Ridgetown home, a baseball story from 59 years ago seemingly came back to life. Geddes played for a team known as Stanfields, and they had quite a year in 1962 – winning the Truro Pony Baseball League championship. “Primarily, I’d like to find out the names of all the players who were on the team,” Geddes, 73, said. “Without a team photo, it has been almost impossible to visualize all the players who may have been on the team. I have always held a fond memory and respect of being on that team mainly because of the coach Ron Williams and the calibre of the players. “Coach Williams inspired me to later teach the game to many youngsters and teenagers. Recently, I decided I’m going to try and track down who was on that team. And if I can, I’m going to try to determine if a picture exists.” Geddes, who grew up in Truro’s east-end and had a 35-year career in the RCMP, retiring in London, Ontario as a superintendent in charge of criminal intelligence, continued. “I played third base and leftfield. Every team member was presented with a Stanfields' crested team cardigan when we won the league championship. It is a beautiful fleece sweater which I’ve kept and looked after all these years. The respect we had for our coach Ron Williams, Butch’s dad, this stands out now as we mention being presented with the team cardigan.” Besides interviewing Geddes, I talked with team captain and second baseman Butch Williams. It appears definite that the 1962 Stanfields team was coached by Ron Williams, and his assistant was Gordon Schurman. Some of the players were likely Jeff Geddes, Butch Williams, Owen Totten, Wayne Schuman, Jim Macdonald, Danny Joseph, and Don Julian. In his book ‘Put It On Paper,’ Joseph wrote a great chapter on the Stanfields team’s trip to P.E.I. He also names Paul Byard as a team member. “It is easy to get confused when trying to name players from the 1962 Stanfields team,” Williams, 73, of Truro, explained. “Players changed teams a lot in those years and besides the Pony League team being called Stanfields, when the team moved up to Colt ranks, my father and coach Schurman also moved up to coach and the team continued to carry the Stanfields name. With no team photo being known of and it being such a long time ago, it is difficult remembering just who played on that team.” Williams was certain that Jim Macdonald was the team’s catcher. He recalled the closing banquet being attended by more than 100 people as the Pony League champion Stanfields team, and the Colt League champion Spencer Brothers & Turner team, were honoured. He showed me a 1962 Halifax Chronicle Herald writeup and photo. It was of Ron ‘Butch’ Williams and Dave Theakston receiving championship team trophies presented by Truro Mayor Hector Hill. “Yes, I remember going to the banquet,” Williams said. “We were each presented with a crested cardigan. But I don’t remember any details about the championship game, it was nearly 60 years ago.” Another highlight revisited by Williams was travelling to Souris, P.E.I. to play. “We went over for one game of baseball; it was a big thing to us kids just to get to go across on the boat. It was really exciting. A joke for a long time after was – ‘we were sorry we went to Souris.’ We played on a midsummer weekend, I was really pumped, and I remember we won the game by quite a few runs.” Seeking information, calls were made to former Pony League players Lawson Barkhouse, Wayne Talbot, and Scotty Maxwell. None of the three had played for the Stanfields team. We were unsuccessful in reaching Danny Joseph and Don Julian. The best journey we’ve taken down ‘Memory Lane’ in some time has been both interesting and exciting. It took the late innings, and we finally reached former Stanfields players Wayne Schurman and Jim Macdonald. And for a couple of surprises – I was grateful that Truro resident Gary Cox stepped up … They were all more than happy to help in the search for the former local baseball champions. Next week… Worth Repeating is a weekly column touching on stories from the past, life experiences and events from the present day. If you have a column idea, contact Lyle at 902 673-2857.