Wentworth athlete in running for spot on Canadian team 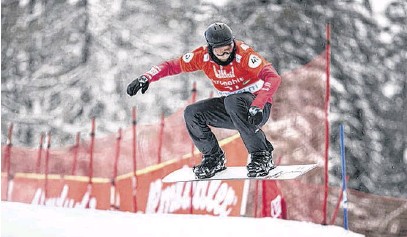 Spending a week at home over Christmas was a break Liam Moffatt needed to recharge his batteries. The 24-year-old Canadian snowboarder was grateful to spend several days of rest and relaxation with his family in Wentworth following a busy start to his snowboardcross season. “It’s been a good rest for me,” said the Truro native, who started snowboarding at seven years of age. “All the hard work is typically done in the summer, anyways. Basically, I’m in maintenance and recovery mode during this time of the season. I’m just lucky enough to get home.” The downtime was a nice break for Moffatt before he heads to Europe on Thursday for two World Cup events - in Krasnoyarsk, Russia, on Jan. 7-8 - with the Canadian team. Up for grabs is a spot on the Canadian Olympic team in the snowboardcross event. The Winter Olympics are being held in Beijing, China, from Feb. 4-20. Moffat, who is ranked No. 17 in the world, while teammates Eliot Grondin and Kevin Hill are No. 4 and No. 27, respectively, are the main contenders. There are two Olympic spots available on the Canadian team, with Grondin being the favourite for one of the berths. Moffatt is solidly in the running for the second spot and said a high finish in Russia could lead to a third Olympic competitor for Canada. “If you look at everything results-wise from the last couple of months, I am pretty confidently sitting in No. 2 or 3 spot for the Olympic team,” said Moffatt. “As of right now Canada only has two spots locked in. I will be fighting for that second one or hopefully earning a third spot for the country through these next two events. “It’s just me that has the ability to earn a third spot. That’s due to the fact that COVID has changed the quota earning ability of a country and they extended that all the way out to 2019. My season was looking a lot different in 2019. So unfortunately my points weren’t as high back then. “There’s a lot of scenarios in which things could come into play. I’m just trying to keep a level head and go into the races as mentally prepared as possible and keep the momentum going that I found this year.” BREAKTHROUGH RESULT Moffatt has had a couple of breakthrough results in 2021 and is racing with an abundance of confidence. In February, Moffatt placed eighth overall at the world championships in Sweden. Proving that he belonged among the world’s best led to a successful summer of training. “I knew this was going to be a big year for me,” said the sixfoot-five Moffatt. “It’s was in my head all of this summer. I took that and fueled myself to be able to put that little more effort in, both mentally and in the gym. I was happy with how I felt coming into the season.” His new season began in November with a 12th at an Olympic test event in China. He followed that up with a ninth-place finish at a World Cup event in Austria on Dec. 10. “Mentally being able to show up for that first race in China at the Olympic test event, being able to competently put a good run down and qualify for the top 16 was a big confidence booster for me. “I was ninth at the World Cup in December. The racing is there and I’m excited to try and pull it off again.” CANADIAN TEAM The Canadian snowboard cross team will spend a few days in Munich, Germany, to prepare for the World Cup races in Krasnoyarsk. Moffatt said the team will use this time to get their sleep schedule back in order before heading to Russia on Jan. 2. Moffatt said he’s looking forward to the World Cup event and the opportunity of earning an Olympics berth with Grondin and Hill. “The three of us on the national team are guys I have raced with for a long time. We have a really good relationship between us,” said Moffatt. “I do have a chance of creating a (third) spot which is super exciting. Obviously, my goal in the grand scheme of things is to have all three of us on the (Olympic) team in February.” Competing at an Olympics is just one of Moffatt’s career goals. “The Olympics has always been something on top of the list for me. I like to think that I have a good couple of years left in this career. But the Olympics isn’t the end-all goal for me. I have another cycle that I can aim for. “No matter what happens I’m going to be doing this for a little bit and I’m excited about that. To be able to be consistent on the World Cup and win a World Cup would be another big goal of mine.”