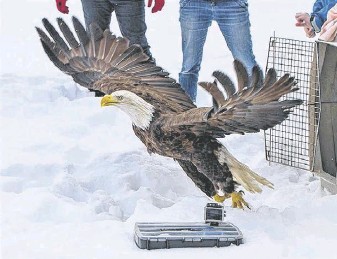 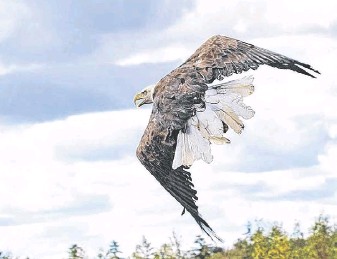 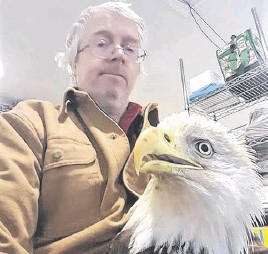 TRURO - Experience has endowed Brenda Boates with the instinct to know when an animal has concluded its rehabilitation and can be released back to the wild. The animal’s attitude helps too. “The day they hate us, we are really happy because that’s when we know they can go,” quipped the wildlife operations manager at the Hilden-based Cobequid Wildlife Rehabilitation Centre (CWRC). The centre reached its 20year milestone with the start of the New Year. “It kind of took me by surprise,” centre co-founder Murdo Messer said of the two-decade mark. “It didn’t occur to me it was 20 years until November. It came by so fast. When you’re in the middle of it, you don’t realize the time going by, and then, all of a sudden, you pause and realize, ‘whoa, that was a long time ago.’” Messer and his wife, Dr. Helene Van Doninick, started the centre after moving from Newfoundland, where she was doing similar work. Van Doninick, who passed away in 2018, was a wellrespected veterinarian, recognized internationally for her work with the treatment of oiled birds, and selected for the Canadian Veterinary Medical Association’s Humane Award just before her death. “She was seeing small animals, birds primarily, that would get hit by a car coming to her clinic. No one was willing to pay for them and none of the clinics were willing to care for them. She knew they just needed a little bit of time and care to heal,” Messer said. “She would bring them home, look after them, and set them free.” Messer said his wife continued doing that type of work when they moved to Nova Scotia in 1998 and it was 20 years ago that they decided to incorporate as a non-profit charity to help pay for the expenses. “That way, we could get donations to raise money to pay for the care, the space, and food for these animals while here,” he said. “It all grew out of that.” Over the years, the centre has seen plenty of successes, but, of course, there are unfortunate situations when the animal is beyond rehabilitation and returning to the wild. “Our goal is always to work towards the return of the animal to the wild,” Messer said. “Most of them are here because of what people did, either deliberately or inadvertently. We see them at their worst point; damaged, broken, starving, in a serious state of needing help, and some beyond help – need to be euthanized. But for the ones we can save and return to the wild, when we see them go back to where they should be, it feels very good.” Boates has been with the CWRC for seven years, first as a volunteer and now in the CWRC’S only paid position as manager. She said it takes compassion, knowledge, and understanding to work with wildlife, and that means emphasizing the fact these are wild animals. “You have to understand how wildlife works,” she said. “You can’t take an eagle which has flown the skies for how many years, and say, ‘let’s amputate a wing that is not fixable and keep it … put it on display.’ They’ve flown the skies, they know what it is to be wild, so that is not a good life for them. You can’t keep a wild animal that is going to be in chronic pain … you have to understand that. It took me a long time.” Boates said the goal is to limit human contact with the animals as much as possible and that includes not talking. “With a domestic animal, sometimes talking and stroking will calm the animal, but with a wild animal, they can sometimes take that as predatory,” she said. “People will say, ‘it knows I’m trying to help it.’ No, it’s going into shock, it’s not helping the animal … they will not know you’re trying to help them.” A CWRC pamphlet lists three things to do if finding injured wildlife; first – take a picture (do not post on social media to ask for advice); second – secure animal if safe to do so, offer no food or water; and the third step – contact your local wildlife rehabilitation centre or Department of Lands and Forestry. Education is a big part of what the centre does, although COVID has had an impact on its outreach opportunities. “It was a huge component of Helene’s work,” Messer said, noting examples such as the hazards of lead in hunting and fishing equipment, the problem of free-roaming domestic cats, and what can be done to help prevent birds from crashing into windows. FUNDRAISING SUPPORT The pandemic, as it has for so many organizations, has also hurt the CWRC’S ability to raise money. They’ve had to cancel their major fundraiser the last two years and expect it to be three years in a row due to COVID. “The best way is to donate directly to us through canadahelps.org,” Messer said for those looking to support the centre and its work. “Just search for our name. They deal with all the tax receipts.” Other methods of reaching and supporting the centre could be through its social media presence, website (cwrc. net), Facebook, and Instagram. Along with monetary donations, in-kind donations and volunteers are also needed. There is a link to other fundraising avenues, such as a 50-50 draw and the My Giving Circle program on their website. CWRC WISHLIST: Gift cards (grocery stores, gas stations, pharmacies, home building stores, pet supply stores, and feed supply stores) Food (raw nuts, frozen berries, and fresh or frozen whole fish) Miscellaneous household items (sheets/pillowcases/ towels, paper towel, unscented laundry detergent, first-aid supplies such as gauze, first-aid tape, band-aids, cotton balls)