Truro’s Mr. Football is a man all about giving back to one’s home community During the 2016 and 2017 football seasons, no one could have blamed Scotty Annand for feeling like he was on top of the world. Annand, a Truro boy, was an assistant coach with the Saskatchewan Roughriders of the Canadian Football League. He also held the position as the team’s “football operations coordinator,” overseeing 130 staff members and players. “I got to live the dream, getting to be involved with Canada’s team, the Roughriders,” said Annand, 59. “It was quite a thing to be part of ‘Ridernation.’ The sport means so much to Saskatchewan residents and families. Football is a tradition and a family affair. Spending those two seasons with the Roughriders will always be a memory that stands out as one of my greatest sports highlights ever.” Annand had previously taught at local schools, including teaching biology and phys-ed at Cobequid Educational Centre from 1997 until 2016. Besides coaching the CEC Cougars high school football team, Annand held university coaching positions with St. FX, Saint Mary’s and Mount Allison. In a recent chat with former educator, sportsman and successful coach Keith Mackenzie, this was his take on Annand’s amazing journey. “... Scotty Annand has made so many contributions locally,” Mackenzie said. “He transformed the CEC football facility into probably the finest high school field in Eastern Canada. The aging bleachers had to be replaced and it was Scotty who sourced state-of-the-art bleachers from the United States and had them installed. Scotty undertook a massive project in constructing a multipurpose press box, meeting room, a gathering area overlooking the field and an electric scoreboard. “As the result of a substantial contribution from the Macpherson family, the facility was named The James Macpherson Stadium after the former Cougar who died tragically in a plane crash,” Mackenzie said. “Scotty also spearheaded a drive to build a new clubhouse at the TAAC Grounds for minor football. He headed up the massive construction of the Cougar Dome and there is no reason to believe that this extraordinary man is done.” As is his humble nature, Annand deflected the compliment. “The bottom line is that it is all about the kids and the athlete. This is why I don’t think a businessperson ever said no,” he said of requests for financial contributions. “I am so grateful to the individuals, the companies and the businesses who supported local projects. As I reflect back on upgrades to facilities, I realize how special our community is.” Given all he has done in pursuit of the upgrades to numerous local sports facilities, does the “idea tank” ever get low? he was asked. “I was fortunate, for during my travels I got to see high school football stadiums in both Canada and the United States. Their sheer size, their impact on their communities stood out. This made me realize how far we lagged behind others. This inspired me in a way to come back to my own area and help with school programs and community facilities.” Those observations especially hit home when Annand overheard a visiting parent’s conversation during a local minor football game at the less-than stellar TAAC grounds. “A visiting player’s parent made an embarrassing remark referring to the poor state of our existing clubhouse. I immediately got on the telephone with the president of Truro Minor Football, Steve Fulton,” Annand said of a proposal that eventually went to the Town of Truro and resulted in improvements to the TAAC Grounds. But while Fulton may have received the first call, the past president of Truro Minor Football who has been involved in the sport for more than 30 years was quick to lob the credit back to Annand for the much-improved state of the grounds today. “There was only one reason the new clubhouse was built at the TAAC Grounds,” Fulton said. “It was because of Scotty Annand. He wouldn’t let it go and we made it happen. Really, Scotty is Truro’s Mr. Football.” While too many committee names and members have been involved to mention, Annand’s appreciation was evident for those involved in the projects that have come to fruition, including such individuals as Jamie and Nicole Bagnell and Rod and Robin Maclennan. And no, the “idea tank” is not empty, including Annand’s desire to complete his original vision for the community — an all-weather turf field, a synthetic track and a new regulation-size baseball diamond. “In being optimistic, the group presently pursuing the TAAC Grounds revitalization project is in good hands,” he said. “They are working towards making this overdue project a reality.” Inducted into the St. FX X-men Hall of Fame in 1996, Annand was also inducted into the Saint Mary’s Huskies Hall of Fame. There is no doubt he will leave a lasting legacy — as a highly successful athlete, teacher, coach and community builder. Annand and his wife Patty recently purchased a house in Truro’s west end where they are involved in renovations. The couple have two grown daughters, Megan and Emily. Worth Repeating is a weekly column touching on stories from the past, life experiences and events from the present day. If you have a column idea, contact Lyle at 902 673-2857. 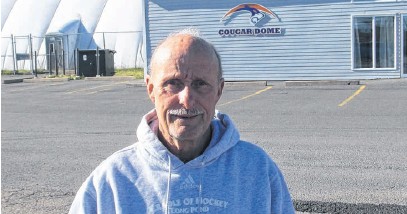