Busy bucks are at higher risk during rut season

This is the stage of the deer hunting season when seasoned hunters realize there are higher chances of seeing bucks on the prowl. The deer-mating – or rutting ¬– season generally runs from mid October to early December. During the rut, male deer (bucks) have their mind primarily on one thing – to procreate in order to grow the family. As a result of this, it is useful for hunters to know what to expect for deer behaviour during the rut. For the hunter, this period represents the best time to harvest a buck, as deer become more active during the daylight hours, making them easier to spot and kill. During phases of this season, some deer wander into open areas in broad daylight. Unlike other seasons, spotting a doe during the rut often means there’s a buck nearby. However, the increased activity of bucks chasing does means that hunters need to set up properly to maximize the chance of spotting a buck when it is most vulnerable to line up a good shot. The phases of the rut include: • Pre-rut - occurs from mid to late October • Seeking - from late October to the first few days of November • Chasing - (peak rutting phase) occurs from early to mid-november • Tending - (or “lockdown”) from mid to late November • Post-rut - from late November to the end of the month • Second rut - (not guaranteed) during the first two to three weeks of December The pre-rut phase occurs when deer movement routines change from earlier in the fall season. During this time, the bucks start to perform rutting activities, leaving signs of their condition on the ground or tree trunks and branches. These “rut signs” include scrapes and wallows where male deer have dug shallow pits, urinated into them and rolled around in the resulting mud to coat themselves in it. Branches and tree trunks might also display signs of fraying from bucks rubbing their antlers on them to remove the velvet coating. The seeking phase is when bucks start to try to find females. Mature bucks begin to walk in the daylight, and younger male deer might begin chasing females during this period. Due to increased hormone levels, deer wander about earlier in the day and rut signs become more prevalent. The chasing phase is the period most hunters refer to as “the rut.” It is the period of the deer rutting season when these animals are most sexually assertive. Little actual mating happens during this phase, but most bucks are actively pursuing does. With just one thing on their minds, bucks lower their guard and become easier to harvest. It is at this phase where bucks are most likely to respond to deer calls reflecting a doe-in-heat, or a buck warning others away. The tending phase is when most of the actual breeding occurs. During this phase, mating pairs usually hide themselves in thick cover, which can make them seem to be in lower numbers during this phase. The post-rut phase is generally one of the toughest phases to hunt. Breeding usually decreases significantly by this time. However, breeding activity isn’t the only factor that affects deer behavior during this phase. The elevated hunting activity during the peak of the rut, often scares the deer into being more cautious and less active during daylight. Near the end of the rutting season, a second rut might occur, which is when females who were not bred during the first rut go into a second estrus cycle. Doe fawns can also become sexually active for the first time during this phase and enter estrus. If food is abundant and the fawns are big and healthy, the latter can happen to a large degree. This scenario is what is happening in communities, such as Truro, where the young deer become generally well fed and in good shape for continuing the expansion of the urban deer herd…. 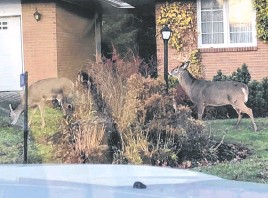