TRURO - While dealing with a bout of mental illness, Ron Mccormick discovered he could best express himself through art. “When I was originally in the hospital, I wasn’t communicating properly with other people but then I was able to get ahold of some paint and brushes and found I could say what I wanted to say with colour and paint,” Mccormick said. “It’s another form of communication I was able to tap into.” That realization came in the mid-1990s, and Mccormick has continued to paint ever since. “It became very important to me … for my therapy, my recovery,” he said. Susan King, club manager at the Colchester branch of the Canadian Mental Health Association (CMHA), said art, in all its forms, can play a huge role in helping those with mental illness. “It’s very therapeutic,” she said. “Being creative and creating art, it shuts off the part of your brain that ruminates, so you focus on the artwork instead of all of the thoughts, everything else that is going on around you. It’s so beneficial.” Mccormick has sold his artwork through farmers’ markets and other venues and selections of his work can be found in Truro at Totally Local, and now in Tatamagouche at The Village Gift Shop. Mccormick said he moved to Tatamagouche in April. He had lived in Truro since his hospital stay in the 1990s, noting he received excellent support while in the community. His artwork captures his appreciation for the town and a lot of what it offers. “I went through Victoria Park, Civic Square, Kiwanis Park, and I painted from just about every angle I could see that I wanted to do,” he said. “But I, kind of, ran out of subject matter in Truro, so that is why I wanted to pull up stakes and come to another town.” His new setting has inspired more seascape paintings. “Boats, the sky falling into water … more nautical scenes, I guess you could call it,” he said. Knowing how important art is to him, Mccormick wants to freely share some of his creations, known as Cards of Comfort, with those who may be feeling isolated and alone. After watching his cards s accumulate when they weren’t selling well at farmers’ markets, he began giving a few away here and there. “As people walked by, I would give them cards and we would talk for a minute or two,” Mccormick said. “I would see people’s attitudes change when you gave them a card, so I started thinking about giving more cards away. The reason being, so many people are isolated due to COVID, I thought if they had a card and connected with a loved one, or someone they haven’t talked to in a while, then, possibly, the person who received the card would write a letter in return.” His connection with King has enabled Mccormick to distribute even more cards. “We’ve taken it on and have been distributing the cards for him,” she said. “We have given packages to some businesses in Truro asking if they wanted to hand them out, and we have some here in our office (859 Prince St.) if people want to stop by and pick one up.” The back side of the Cards of Comfort are left blank so they can be used for any occasion. “People email now but there is nothing that compares to getting a card by surprise,” said Mccormick, who has been handing them out for about two decades. “Most times, people only get cards at birthdays or Christmas, if they’re lucky. So I thought it would be nice to get a bunch of them out there. It might just improve a person’s mental health for that particular day … that is all I’m trying to do.” 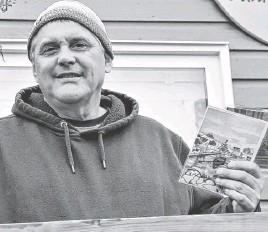