Looking back at Truro's Victoria Square

Did you know that Victoria Square was Truro’s original “town centre” prior to the development of the railroad? It was initially referred to as “the Commons” and was created in 1760 when the Planters arrived and the Cobequid Townships were established. The Common became the meeting point for travellers and residents alike as three main roads that came from other areas of the province converged there. It was sometimes also referred to as “the Parade.” Since transportation via land was primarily by stagecoach, inns, lodging houses, taverns, and stables developed around the site. It was likewise used as a pasture for livestock enroute to and from Halifax. Truro’s first courthouse was likewise located at the Common. LARGER AT ONE TIME The Prince of Wales Hotel (formerly Doggett’s Hotel) was also located at the Commons. Nearby was Hiram Hyde’s stagecoach services. Although the location of the Commons hasn’t changed much today, it was indeed larger at one point, extending as far east as Revere Street. However, a blacksmith shop and several other developments were eventually permitted, which changed the eastern boundaries. Today, the eastern boundary is bordered by Commerical Street. Court Street borders the west side whereas Queen Street is located to the North and Prince Street is located to the South. The space was bordered by several wellknown businesses, including Truro’s first newspaper—the Sun, Truro’s first bank, Snook’s Grocery, and William Cummings’ Dry Goods. The area became formerly named Victoria Square in 1887 in commemoration of Queen Victoria’s Golden Jubilee. It has been redesigned in a beautiful Victorian landscape style to include an ornamental fountain, walkways, trees, and a bandstand. TOURIST BUREAU Since several roads converged at this point, the tourist bureau was eventually developed on site. Aside from being a common area, the space has historically been used as a parade ground by local militia. During the twentieth century, interest and upkeep of the space dwindled. The bandstand was demolished in 1953. It was used as a location for local Canada Day celebrations but did not receive much attention until the 1980s when the site was redeveloped. A wading pool was constructed and used as a skating rink during the winter. The pool used recycled water. A rod-iron entrance gate was installed, and a Grand opening was held in 1986 following the upgrades and beautification. A new Tourist Welcome Centre was subsequently constructed in 1989. Victoria Square is a designated Heritage Property. In 1994, the Truro Heritage Advisory Committee installed a memorial plaque to honour the first English-speaking settlers of Truro. Although Truro currently has a beautiful civic square to host events such as concerts, skating, tree lightings, and Canada Day celebrations, it has another common public space that it can be proud of too. 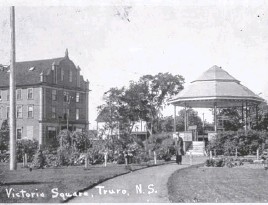