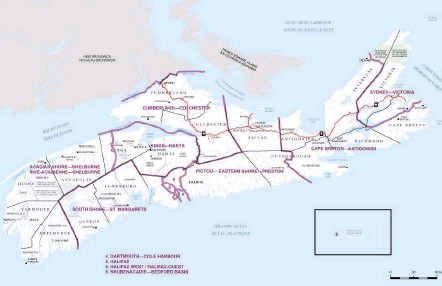 A proposed new electoral map for Nova Scotia that is up for consideration at public hearings this spring could bring changes to both the West Nova and South Shore St. Margaret's federal electoral district boundaries. The new electoral boundary map is being proposed by the Federal Electoral Boundaries Commission for Nova Scotia. "The Commission has proposed a number of changes to not only the boundaries, but also the names of several ridings. We look forward to receiving feedback from the public on our approach," said Justice Cindy A. Bourgeois, chair of the three-member commission, in a media release. Under what it proposed, gone would be the riding of West Nova, replaced by the riding of Acadian ShoreShelburne, which would take in the counties of Annapolis, Digby, Shelburne and Yarmouth; and a lesser part of Kings County than it presently does. Shelburne County is currently part of the South Shore-St. Margaret's riding. That riding would continue to represent voters in the Region of Queens, Lunenburg County, and, to a greater extent, in Halifax County. The Nova Scotia commission is holding nine public hearings between May 30 and June 27 – eight in person and one virtual – to gather comments and feedback on the proposed boundaries and electoral district names. In Kentville, a public hearing will take place at the town hall, 354 Main St., on June 6. In Yarmouth, a public hearing is scheduled for June 7 at the Rodd Grand Hotel. On June 8, a hearing will be held in Bridgewater at the Best Western Plus Bridgewater. All hearings start at 6:30 p.m. A virtual hearing on June 27 will wrap up the consultation process. “This is a public consultation process. We really do need to hear from the community,” said West Nova MP Chris d'Entremont in an interview. “I take it as a proposal. I take it as the commission trying to adapt to the population growth in Halifax and that has created a domino to the other ridings around it,” said d'Entremont. “We are trying to get people to participate in the public sessions to inform (the commission) these are communities of interest, these are communities that work together, these are communities that don't have a lot in common," he said. "I think in the end it should rectify itself. Putting a chunk of the South Shore riding into West Nova, there's some connection but not a whole lot.” In Kings County, the Town of Berwick would be gone from the riding under the proposed boundary changes for Acadian Shore-Shelburne, said d'Entremont, since the proposed change would mean another 7,000 constituents. So far, d'Entremont said he hasn't received a whole lot of feedback from the community, other than a few phone calls. “All of the ridings are affected pretty dramatically in this round,” said d'Entremont, adding although the MPs have been talking to each other about 'should this be there and that be there,' they need to hear public first. The Constitution of Canada requires that federal electoral districts be reviewed after each 10-year census to reflect changes and movements in Canada's population. The current federal redistribution process began in October 2021. A representation order describing and naming Canada's future electoral districts is expected to be completed in September 2023. Changes to electoral districts will be applied in the first general election called at least seven months after the representation order is proclaimed. “We believe that these changes will not come into effect until April 1, 2024, at the earliest,” states Elections Canada on its website. Under the Electoral Boundaries Readjustment Act, the Federal Electoral Boundaries Commission for Nova Scotia's main aim in redrawing boundaries is to divide the province into 11 electoral districts that are as close to the electoral quota as reasonably possible. The electoral quota for each district is 88,126 people, which is the number you get when you divide the total population of the province (969,383) by the number of electoral districts (11). The new proposals – which also impact other ridings – reflect Nova Scotia's increase in population from 921,727 in 2011 to 969,383, as captured in the 2021 Census, and take into consideration communities of interest or identity, and historic and geographic factors. Everyone is invited to attend the public consultation sessions. For those wishing to make a presentation at a hearing, notice of representation must be sent to the Commission no later than May 23. People can also send comments and feedback to the commission without attending a public hearing. For further information visit redistribution2022.ca.