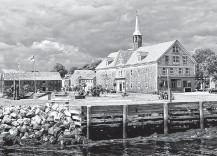 Excitement is building as word spreads that a major film production is coming to Shelburne in the spring. Washington Black, an award-winning novel by Canadian author Esi Edugyan, is being made into a ninepart mini-series. The search has already begun for accommodations to house up to 150 crew from performers to boom operators. Local municipal units have been sharing word of the production. “Disney+ Canada Productions is looking to be filming in the Shelburne area for four to five weeks sometime between March 1 and May 20 of 2022. At peak, they are anticipating up to 150 crew. As such, they need to source out as many accommodations in the area so as to maximize revenues for local citizens and businesses," reads a letter, in part, posted by the Town of Lockeport on its Facebook page. Otherwise the crew will have to travel to and from the area from outside the county. “It's a joint effort,” says Shelburne Mayor Harold Locke, with Lockeport and the Municipality of Shelburne, along with the Town of Shelburne, putting out feelers for accommodations in the area. The Town of Shelburne has been working with the production company since last summer, says the mayor. “We've had numerous meetings since last summer. First of all, it was just a scout. Then different parts of the group came down over the summer and fall. Last time was the big production crew with most of the producers,” he says. Mayor Locke says town staff have played a big role in bringing the production to Shelburne. “I have to give the town staff credit for doing what they did. They went above and beyond to make this happen. I'm very pleased that it is happening. “We've had at least five visits from different aspects of the company. They were quite impressed with the whole situation.” Shelburne's historic waterfront is the main drawing card for the production company. “That's the area where they showed the most interest in, by the old mill building and sailing academy,” said Mayor Locke. “It's the historical background of the town that has put us in a position to host and have them come here. We are quite pleased. Keeping the waterfront up to standard has helped out before and it's helping out again.” The mayor says there is a lot of excitement for those who know that something is happening. He expects that to build when the filming begins, hopefully sometime in late March or early April. Pat Chute, who operates the historic Cooper's Inn on the Shelburne waterfront along with her husband David, says they have already submitted an accommodation application form to the town and have been in communication with town staff. “We usually get some business from film productions in the area. The last big one was The Book of Negroes. We had the leads here as well as some behind the scenes people," says Chute. "With Moby Dick, we had some cast members, including Donald Sutherland. All have been great experiences." ''It's wonderfully refreshing to have the opportunity to showcase our amazing town and county,” adds Chute. “Shelburne is truly a gem in Nova Scotia's historic landscape and we're thankful for the foresight and diligence of those folks that were able to broker this with Disney Films. It's heartwarming having Disney discover and recognize how special Shelburne is. May it open the doors of a new era." Others in the community who have past experiences working with film productions are also working behind the scenes. Sam Brannen, director of the Barrington Museum Complex, says she has been working with the set director about possibly using some artifacts and or locations in the museum complex. She has also given the community a heads up that Hennessey Casting will be handling the background casting for the series. “It will be a big economic boost,” says Mayor Locke. “Extras, hospitality, restaurants, accommodations, supplies, it will be a big benefit to the town and the surrounding areas will benefit immensely as well.” ABOUT WASHINGTON BLACK Washington Black was published in 2018 and is the third novel by Canadian author Esi Edugyan. The story follows the early life of George Washington "Wash" Black, chronicling his escape from slavery and his subsequent adventures. “From the blistering cane fields of Barbados to the icy plains of the Canadian Arctic, from the mud-drowned streets of London to the eerie deserts of Morocco, Washington Black teems with all the strangeness of life. This inventive, electrifying novel asks, What is Freedom? And can a life salvaged from the ashes ever be made whole?” reads an online review.