When COVID restrictions lifted after months of solitude, children and parents flocked to a new park bordered by Elm, Brunswick, and Huntington streets in Yarmouth. Jean Clulee, chair of the Doug Melanson Park committee, says members were “dizzily excited” when they saw residents walking on the paths, sitting on the benches and children playing on three landscape mounds designed especially for them. On Nov. 14, the final aspect of the park was unveiled – an interpretive panel. The park is named after the former Milton school caretaker who worked there 1969-1989. “Everybody loved this man,” says Jean Clulee. “He seemed to know and love all the kids.” Mayor Pam Mood says her children attended school at Milton. She remembers when the building was demolished and council was wondering what to do with the one-acre site. In 2015, the Milton Improvement Society took up the challenge to create a park where Milton schools had stood since 1869. Mood saw it as the perfect solution. “There are more people than we can even count who have put something into this. This is Community Building 101. It's a great place to gather,” she says. The agreement with the town was that the cost of the park would be shared. The town would donate $50,000 in hardscaping and the park committee would match it. Committee and volunteers worked hard to raise the funds and even exceeded the amount required. Businesses, residents and organizations stepped up to make the dream a reality. As mentioned, Melanson – for whom the park is named after – worked for two decades as custodian at the former Milton school from 1969 to 1989. But his contribution went beyond just his job. Former staff and students have described him as someone who always made others feel happy and safe. He passed away in 2009. Park committee member David Sollows, a former Milton School president and Grade 6 teacher, is the manon-site that everyone turns to when it comes to planting and growing. He's excited about the many different types of trees now on site. They include Copper Beech, two varieties of cypress, Amur maple, Seven Son trees, Mandarin jewel dogwood, Ginkgo, Katsura and many more. He says his favourites will change over time. “I'm partial to the dawn redwood because they can be so long-lived,” he says. “I want to see how it handles our maritime climate. The flowering trees will bring spring and early summer interest. The Seven Son trees are new to me and are proving to be great for fall interest. The copper beech is a shout out to the majestic copper beech trees that we have had in Yarmouth, many of which are now gone." Sollows adds that the park shows what can be accomplished on a demolition site when a community-minded group of volunteers works together with town staff and leaders to accomplish a goal. “It's provided opportunities for people to give back and recognize a site from which many, many children have gone on to accomplish great things in this world. As the trees grow, much of the park will be filled with their beauty. I would love to see it in 20 years.” The planting comes with challenges. Some of the trees may not survive over time and will have to be replaced. Deer are an issue. There are viburnum shrubs that were included but will probably have to be replaced because deer seem to like them. One tree has been replaced twice because a deer used the trunk to scratch its antlers and removed the bark. Mulching is done to keep weeds down, so weeding needs should be minimal, says Sollows. A groundcover – a perennial geranium – is now being used that deer don't like. It's been planted around many trees and borders with some success. The park is officially a town park and town staff assume maintenance of it. The plantings selected were chosen with low maintenance in mind, and the play mounds have proved to be just that. “Adults ask, ‘What are you going to do with those hills?' My response now is, ‘Ask a child.' There's also a balance beam in the northeast corner,” says Sollows. 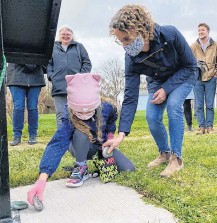