The iconic Nova Scotian artist – Maud Lewis – was famous for selling her work for far too little. An avid collector of her work has heard many stories about her paintings, including how they obtained them. “I bought a painting last year from a lady who told me the story of how she acquired it,” says Chad Brown. “She remembered it like it was yesterday and said she traded a small tub of ice cream – with the wooden spoon on top – for a painting. “These types of stories, about people trading services and items for paintings, were very popular," he said, "but hearing about trading a painting for a small tub of ice cream was the best." Another noteworthy story is Maud being in the hospital and using markers to paint cards for the nurses during her stay. “One nurse that reached out to me was given a card by Maud while she was in the hospital, which the nurse cherishes to this day." Brown recently put a post on the Digby Talks Facebook group saying he was looking for Maud Lewis paintings. "As a reminder, I am offering a minimum of $20,000 and will pay up to $30,000, depending on the image," he posted. A far cry from a tub of ice cream. But not everyone is willing to give up their Maud Lewis paintings. Yolanda Goulet Marsolais, a Deep Cove, Digby County, resident, has an original Maud Lewis painting she never wants to part with. The scene is of a man pulling a woman holding a bouquet of flowers, sitting in a boat in a lake full of lily pads. “It's quite a romantic little thing,” she says. "It's really, really dear to me. I took it all the way to Costa Rica when I was living there for two years. Maybe my kids will want to sell it, but I'll never sell it.” As for Brown, he was surrounded by Maud's work while growing up in the Maritimes and didn't even realize it. His mother talked about Maud Lewis all the time, so he bought her a calendar for Christmas one year. “Looking back, I know this is where my love for Maud Lewis started,” he says. Although Brown was born and raised in rural New Brunswick, he now labels himself a naturalized and proud Nova Scotian. In college, he completed two years of business administration and moved to Halifax, where he has lived with his fiancé Shannon for the last 13 years. Brown made his first significant purchase of Maud's work on EBay, a “beautiful print,” he says, called 'Two Deer in Winter.' After conducting some research, he learned that it was a silk-screen print by Bill Ferguson, who had discovered Maud Lewis in 1962 and acquired the copyrights to make reproductions of her work. Brown decided to investigate distant family members of Ferguson to see if they might have some prints to sell. After weeks of digging, he met the grandson of Ferguson and had the opportunity to visit the Ferguson estate, which had been abandoned for the last decade. “We spent hours going from room to room, finding prints throughout the house, some still hanging on the walls with a thick layer of dust," he says. He offered to purchase the entire collection, including Christmas cards, postcards, personal effects, letters, documents and even complete receipt books. Brown is keeping the majority of the collection, but wants to sell some privately so “people can enjoy them as much as he does.” Over the past year, he's been collecting anything Maud Lewis related. “I love collecting things like newspaper articles, old Lance Woolaver books, VHS movies, posters and so much more,” he says. His prices for prints range from $350 to $950 based solely on how many he has remaining. He's used income from the print sales to purchase original Maud Lewis paintings and learn as much as he can about them. In owning the collection of prints, he says he quickly learned about how many people knew and loved this folk artist. He credits the movie 'Maudie,' released in 2017, as projecting this Nova Scotian treasure – born in Yarmouth County – to nationwide and international status, although she was well known even before the film was made. “Maud's very real-life struggles, which were touching to see in the movie, speaks to her strength and endurance," says Brown. "The ability to remain happy with having so little is a story that you can see through all her paintings." The first painting Brown purchased was called Summer Oxen with Tulips, a bright and colourful painting. It looked almost identical to one of the silkscreens he owned. Since starting his collection, he's purchased and sold at least 20 original paintings to date. As his collection grows, so does his passion for Maud Lewis. He hopes one day to open a little gallery to let the public see his collection and also create an avenue to sell prints and paintings. “I've been told by several experts that Maud painted over 10,000 paintings in her lifetime. I can promise you, the majority of people that own a Maud Lewis will not let it go without a fight," he says. "The single largest challenge I have as a buyer is finding someone who is ready to sell.” A Maud Lewis painting, ‘Sandy Cove in Fall', recently sold at auction for $45,500 – a new record hammer price set at Bezanson Auctioneering in Victoria Vale, Annapolis County. The painting shows St. Mary's Bay with mainland Nova Scotia in the background. 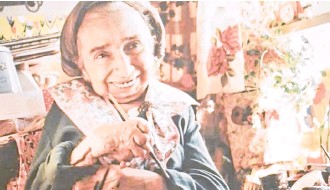 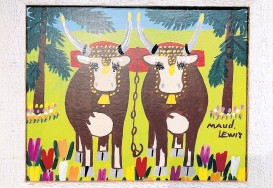 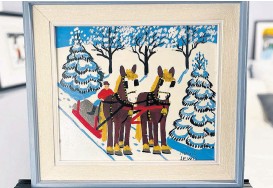 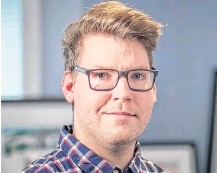