Last year a majestic buoy tree at Dennis Point Wharf in West Pubnico drew visitors from Clare to Shelburne, and beyond. Yvette d'Entremont, spokesperson for the West Side Improvement Society – the organization behind the project – says the buoy tree was an “amazing” hit and will return. “We're in the planning stages now,” she said in a recent interview. “We're just looking at the lights and preparing everything.” “Last year, those lights (64 sets of 70) just didn't pan out. It was a full-time job just trying to keep on top of the darn things.” She added that the location – windy and near the ocean – are a challenge. Overseers Gail and Allister d'Entremont, who designed the holiday icon, have addressed the issue this year by arranging for 4,200 all-new, guaranteed, white Noma lights. D'Entremont said last year, Allister had a camera pointed at the tree and could monitor it from his phone. “When lights went out, off they went to fix them – he or (others),” said d”Entremont. “Allister said, ‘I can't have people coming here from Shelburne, and there's a string of lights not working!'” she laughed. This year, those who donated buoys last year will have the opportunity to find and write a memorial tribute on their buoys before the structure goes up. As for how many buoys are used in the project, your guess is as good as the builder's. “Before they're put up this year we're going to try to get a count because that's always a question,” said d'Entremont. She said there was a steady stream of cars to see the tree; even on rainy, windy nights, people came. When the tree was lit last year, a jar was passed around the large crowd for donations, raising money for the local St Vincent Paul Fund. D'Entremont wished they had left a guest book by the tree to learn how many visitors there were. The tree's three sections are made from aluminum and fit together, wrapped with a net for the buoys to be hooked on. At the end of the season, a tarp was made to cover the mound, and it was left outside one of the fish plants in Lower West Pubnico. D'Entremont says volunteers will be working on getting the tree constructed during November and that a tree lighting is tentatively scheduled for Nov. 28. Floyd d'Entremont, wharf manager for Dennis Point Wharf, said the fishermen like the tree. Returning to port, last year they could see its cheerful glow on shore – a beacon of Christmas. He said that many viewed the tree as a positive thing, last year, during a time fraught with high tension between native and non-native fishermen over lobster fishing rights. “We were guarding the wharf from fear of what might be happening here,” said Floyd. “For 18 nights prior to dumping day, every night we had four or five people, plus our regular night watchman to guard the wharf.” He said most people arrived between 6 to 9:30 p.m. to see the tree. “It was unreal, and it was actually a good thing to combat the negativity that was going on this time last year. It was a hit," he said. This year, a powerline was moved out of the way of the tree site, so it won't be in the way, and better pictures can be taken. Meanwhile, another local attraction, Annis's Gingerbread House, will return to the St. Peter's church rectory in Middle West Pubnico this year. To confirm dates of buoy tree lighting and gingerbread house visiting hours, visit the West Side Improvement Society Facebook Page. 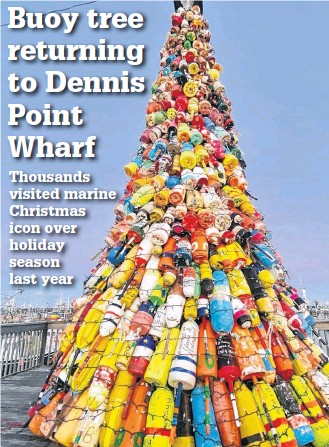