The Kinsmen Club of Corner Brook, which has been in existence for 67 years, recently celebrated the 100th anniversary of the service club's formation in Canada. The current club members, along with members of the K-40 — a group for older Kinsmen who want to stay involved in the community group, got together with some special guests for a Founders Night to honour Hal Rogers, who started the first of what would become a nationwide network of Kin Canada clubs in Hamilton, Ont., in February 1920. Since it was chartered in 1953, the Corner Brook club has raised and donated more than $3 million back to various causes in the Corner Brook community. Here, Kinsmen president Frank White, left, and K-40 president Dexter Bonnell prepare to cut a cake during the Founders Night. 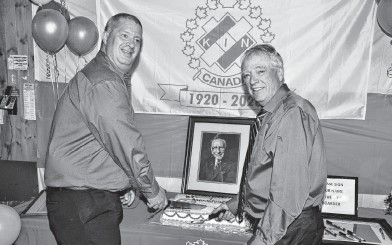