A corner of the world, unchanged

Russell Wangersky Russell Wangersky’s column appears in SaltWire newspapers and websites across Atlantic Canada. He can be reached at russell.wangersky@thetelegram.com — Twitter: @wangersky.

There’s a pandemic of pandemic on the radio, so I turn it off. The highway’s clear, and my instructions are simple: not even social distancing, more like antisocial distancing. Not six feet away, by any means. I’m heading for the scratch woods and rock of Conception Bay North, taking a sunny morning to escape the round and round of worse and worse, going somewhere where the social distancing is measured conservatively in miles. Leave the car, check on the winter house. The snow’s still halfway up the back door, frozen hard enough to walk on. One corner of the ochre bench in the yard peeks through the snow; the sheds are both barricaded. On the trail into the hills, crows and chainsaws fight each other for the right to bingo-call in the emptiness. The snow comes in many kinds. There’s a scrim of fresh new snow on top of older, rotten near-spring snow, and dips in the snowpack have become openings of brown and sedge seeps, bog water working on the snow from underneath. Where dark scraps of branches have fallen on the trail, warmed by the sun, they’ve created their own small pits of melt, sinking downwards in thumbdeep hollows. Spring is coming, or the end of winter, anyway, and the sun is at least starting to literally gain some ground. My feet are loud on the crusted snow, especially since there’s little wind. The sun is impossibly bright, reflecting in from all directions. The crows follow me, swooping treetop to treetop, curious and calling their corvid insults. It’s easy to triangulate onto the woodcutters, betrayed completely by a flash of reflection from the windshield of one of the snow machines. They’re cutting selectively; the trees here are small and stubby, small patches of spruce scattered on the open ground and bog in clusters like water drops on a plastic shower curtain. They’ve been cutting for some time. After I pass them, I realize that there are curling snowmobile tracks and long thin lines of the sled runners in varying stages of snowfield decay coming onto the main trail from several directions. Each one leads to the backside of a copse where they’ve harvested six, seven, eight trees, leaving the windward side of the block of trees intact to shoulder into the wind. Walking the frozen snowmobile tracks offers an unwarranted confidence. Step off the trail, and in some places, you’re still thigh-deep in snow. I head west, uphill on a long steady climb on a side trail that has one single snowmobile trail, older than any of the others. At first, there are not many tracks. Like the snowmobiles that occasionally leave their snaking trails over whole blocks of snow while avoiding other areas entirely, the rabbits seem to have their own favourite spots. The measuring stick for rabbits is the alders. As the alders fill in along the side of the trail, there are more and more rabbit tracks, sometimes wide, beaten-down trails that would have had teenaged me thinking about snare wire. Instead, I’m picking out a fox track, loping downhill and vanishing along a particularly busy rabbit run, and feeling the heat of the sun on my back through my winter coat. Counting the things that are all around me, and mostly unseen: crow, rabbit, fox, coyote (just one lone careless footprint), chickadee, junco, several sets of the repeated Morse code message of mouse feet, a cat, a flight of (maybe) siskins, gulls, a high dot that says hawk but is too far up to make out clearly. Everything here is as is always is, unchanged by world events. The rabbit tracks stop as the alder thins near the top of the hill. Now I’m up in the one-sided tamarack that are all flattened the same way on the windward side. Soon, but not soon enough for me, they’ll flesh out again in that special green of new soft needles that it’s a delight to feel between your fingertips, almost rubbery when they’re new, at the very earliest a mere fuzz of new growth. At the top, it’s a panorama in mostly snow white and ocean blue. Coming back down, I see that my boot tracks coming up are irregular and gapped, showing up in the fine loose snow before disappearing when the trail’s crusted with ice. I’m almost back to the car when one of the woodcutters comes by with a full sled of wood. The snowmobile’s old, the smell of its exhaust a familiar two-stroke oiliness that flicks my memory backwards to years ago. I’m well off the trail, but this is the closest I’d been to a real person in hours. He’s decked out in a sap-smeared coat and gloves, helmet liner on his head, one knee on the seat. “Some day, hey?” he shouts. Some day indeed. 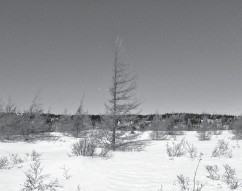