Felines welcome at new Stephenville yoga classes STEPHENVILLE, N.L. — There may be the occasional downward-facing dog, but the cats don't seem to mind a bit. A new youth-led yoga program in Stephenville is incorporating felines into its sessions as a way to enhance the effects of the relaxing exercise. Paws and Reflect is a partnership between the Consumers Health Awareness Network of NL (CHANNAL) in Stephenville, Southwest Coast SPCA and People of the Dawn Indigenous Friendship Center. Emma Dollimount, who is involved with the Ka' qawej Community Media Partnerships program at the Indigenous centre, is one of the youth organizers. She said the combination of cats and poses was ideal for her since she previously did yoga and she loves animals. “Cat yoga is a trending thing, but just wasn’t happening in this area, up to now,” she said. More importantly, Dollimount feels the Paws and Reflect project responds to several urgent local needs. There is an overpopulation of feral cats in the Bay St. George region, there is no shortage of mental health concerns in the human population, and many members of the community are experiencing financial instability. “Paws and Reflect is our way of encouraging people to adopt cats at the Southwest Coast SPCA shelter, while giving people who normally cannot access mental resources a less costly yoga class, known to benefit mental health,” she said. With a donation-based entry fee, Dollimount said they can generate a reliable source of income for the Southwest Coast SPCA. Through this project, she added, organizers are also hoping to create a supportive community and a safe space for people to openly talk and share about mental health. Every month, the sessions will partner with mental health professionals and members of the indigenous community to share their insights. “We want to encourage new friendships and supportive relationships within our community,” Dollimount said. The CHANNAL facility in the Harmon Mall is being used for Paws and Reflect until the new Southwest Coast Animal Shelter is ready for occupancy, expected in late spring. That’s great news for those who came up with the idea, along with CHANNAL clients who wish to take part. Bonnie Rotchford, a regional peer supporter with CHANNAL, believes the combination of yoga and cats as pet therapy all come together to help relieve a person’s anxiety. That's why she was happy to step in and offer interim space for the program to start until it finds a more permanent venue. While space is limited at the temporary location in the CHANNAL facility, the ongoing COVID-19 situation has led to the group offering its classes via Facebook live on Thursday evenings from 6 to 7 p.m. for the time being. Sabrina Muise from People of the Dawn Indigenous Friendship Center is heading up the project. She said the youth involved in the initiative met in the Ka' qawej Community Media Partnerships program. After working with the Southwest Coast SPCA for three months and stumbling across the RBC Ulnooweg Community Challenge Grant, the program participants felt motivated and empowered to begin. They secured a $15,000 grant to acquire mats, straps and blocks to accommodate 20 participants. The group is now working on a logo and branding strategy. Ted White, president of the Southwest Coast SPCA, said it's nice to have something a little bit different in Stephenville. “I think it will go over well and once it starts, popularity will increase. I can see this leading to more networking between our SPCA and other groups,” he said. For information, go to Facebook at https://www.facebook.com/Paws andReflectSWCSPCA/. 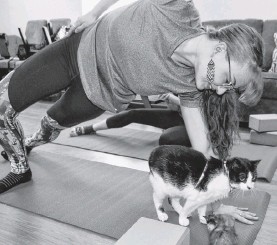