Lourdes family lost all they own in house fire LOURDES, N.L. — Jordan Locke says it’s rough when your few possessions are little more than the clothes on your back. Locke, his wife McKayla and their five children ranging from age seven to 15 years, lost their home on Clam Bank Road in Lourdes to a fire March 15. No one was home at the time. A family dog was unharmed. Cody Brennan, a co-worker and good friend, said Jordan is a great guy who enjoys spending his free time hunting, fishing and guiding and is active in enforcement seasonally as a DFO fisheries officer. “He promotes the Newfoundland experience during his free time and there are many who have benefited from that,” he said. That’s why Brennan felt it was fitting to start a GoFundMe campaign to help the family in the interim as they search for temporary apartment accommodations until their insurance coverage goes through. Cpl. John Butler of the Bay St. George RCMP said police received a call from a neighbour at about 8:30 p.m. on March 15 that a house was on fire. Besides RCMP members, the Lourdes Fire Department also responded. He said the family was visiting relatives in Flat Bay at the time. He said a vehicle in the driveway was moved out of harm’s way, but the house was destroyed. While the investigation continues, Butler said the fire doesn’t appear to be suspicious. Locke said he was surprised when the police called him about the fire. He had a security system in the house, so he’s not sure why the call didn’t come from the security company. “I didn’t get to come home too much,” he said. Locke said it was an older house that had gone through a lot of renovations, including all new siding on the exterior. He thanks the Red Cross for putting his family up at a hotel as he continues to search for somewhere to live in St. George’s, Stephenville or the Port au Port area. He won’t be moving back to Lourdes. “We need to rebuild somewhere else,” Locke said. As a seasonal worker, Locke's unemployment benefits will only help for a few days, so any support they receive will be greatly appreciated. Brennan said some of his co-workers are waiting until the family finds an apartment to decide how they can help. Jordan, who is 34, and McKayla, 33, want to return to some type of normality. “There are no words. We’re at the point that, if it wasn’t for people helping out, we wouldn’t know where our next meal comes from,” Locke said. 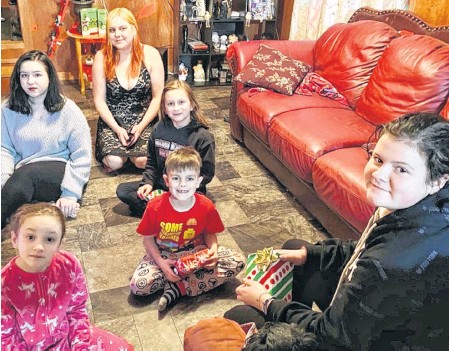