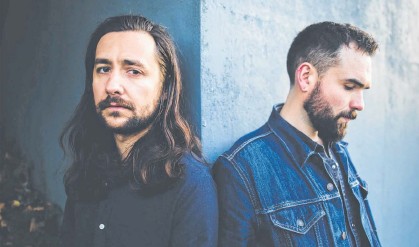 Over the eight years since they formed, Rube & Rake have toured all around Atlantic Canada, but the acclaimed folk duo insist they still get excited to perform in new towns like Shelburne. “We love going to smaller towns,” says Andrew Laite, who along with Josh Sandu make up the act, Rube & Rake. “Halifax is kind of our second home musically (but) for the rural towns — especially ones that we haven’t played before — it’s really exciting (and) it’s exciting to see people’s reactions to the show for the first time.” Based out of St. John’s, N.L., Rube & Rake have gained a dedicated following one show at a time with their evocative folk songs filled with silky harmonies and rich storytelling. In fact, it is the pair’s intimate concerts that have built Rube & Rake a faithful, burgeoning fan base and earned them the Songwriter of the Year award at this year’s East Coast Music Awards. Perhaps that’s one of the reasons that the past two and a half years have been particularly challenging for Laite and Sandu. After all, when the COVID-19 pandemic was at its worst and venues clamped down on hosting live entertainment, Rube & Rake could no longer play to audiences — forcing them to shut down their own touring plans. “We were cancelling shows non-stop but always trying to make plans because we never knew if (we were) going to be able to go,” says Sandu, who notes that for a time he even personally stopped playing music altogether at the height of the pandemic. To make matters worse, just before the first case of COVID-19 landed in Nova Scotia in March 2020, Rube & Rake had just recorded their sophomore album, Leaving with Nothing, and were gearing up to tour it all across Canada. “The reality is, we released our album and then COVID happened, so we didn’t really get a release tour out of it at all,” says Laite, who is excited to finally be able to perform the new songs for fans while insisting their current tour isn’t solely aimed at promoting Leaving with Nothing. “We are not calling this a release tour,” continues Laite about the Maritime jaunt that includes a stop in Shelburne on Nov. 26. “In fact, we have a full new record written and mostly recorded, so we’re coming on the road, I guess, in support of our last record but mostly bringing a brand new record on the road that isn’t released yet.” Laite and Sandu insist the upcoming show at Shelburne’s Osprey Arts Centre will not only feature a selection of songs from their previous albums — including the pair’s award-winning debut, Back and Forth — it will also showcase how much Rube & Rake has evolved in terms of songwriting since their inaugural album release in 2017. “This is my personal opinion, but I don’t think you need to have a record to be touring,” states Sandu. “I think there’s just a big collection of songs we have and we might go out and play just as many old songs as new songs — we just want to be playing shows.” For more information on Rube and Rake, visit: www.rubeandrake.com.