Firebirds show their mettle as hosts of 18U Tier 1 provincials 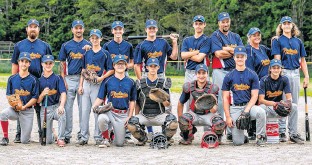 On and off the field, the Weymouth Firebirds stepped up to the plate as hosts of the provincial 18U A Tier 1 baseball championship on the final weekend of August. The youthful Firebirds showed spark as they posted a 1-3 record that included an extra-inning loss to the eventual champions, the Cape Breton Expos. “We had a good tournament,” said Weymouth assistant coach Paul Mullen. “We just fell a little short in a couple of games. But we have a young bunch, so they’ll come around in another year or two. “We received pretty good praises from the other (four) teams, especially on our defence and some of our offence. That’ll come, eventually. “We’ve got a good group of kids. They enjoy playing baseball. They like going to practice and they love playing. They’ve been together since they were nine, 10 years old. They’re quite a close-knit group of kids.” The Firebirds moved up to the 18U level this summer, even though some of their 13 players were young enough to be playing 15U baseball. “Mostly, it’s boys from Weymouth, but we also have a couple from up the French Shore way, the Church Point area, and we have three players from Digby,” Mullen said. “We have two guys that are a little older than the rest. Then, half our team is roughly 16-year-olds, which would put them in the U18 category because of the year they were born. But pretty much the rest of the team are all 15U players. We just didn’t have enough to form a 15U team or an 18U separately, so we combined both ages.” Even at that, Weymouth began the season at the 18U AA level and performed reasonably well in the competitive Bluenose League, recording a 5-11-2 record against older and more experienced teams from across Nova Scotia. “We played AA for the first half of the season,” said Mullen, whose roster included his sons Austin, 16, and Wyatt, 14. “For being a young group, the boys really did well. They held their own. We lost some games, obviously, but we didn’t lose badly. “When (our opponents) found out how young our team was, they were quite surprised at how well the boys played.” In the opening game of the three-day, five-team provincial championship, Weymouth lost 8-2 to Great Village, which went on to lose 11-6 to Cape Breton in the final Sunday. Weymouth and Cape Breton were tied 4-4 after seven innings when darkness suspended their Friday night game until early Saturday morning. After play resumed at 8 a.m., the Expos scored two runs in the top of the eighth inning and secured a 6-4 victory. The Firebirds rebounded later Saturday with a 12-2 win over Antigonish. In its final game, Weymouth lost 10-4 to Pictou County. Cape Breton, which had double life in the playoff round, finished with a perfect 5-0 record. Great Village ended up with a 3-2 slate. Pictou County went 2-2 and Antigonish was winless in four games. Weymouth’s head coach is Jason Addington. His assistants are his daughter Makayla, along with Mullen and George Manzer. The manager is Miranda Addington, Jason’s wife. The Firebirds also counted on the support of their parents, not only for provincials but all season at home and away. “You couldn’t ask for a better group of parents for these kids,” Mullen said. “They love travelling. They don’t mind travelling. Usually when we go away to games, pretty much every parent goes. It’s unbelievable to have 13 kids on your team and pretty much every parent will drive to Cape Breton for games, or to Halifax or the Truro area. We definitely are lucky in that aspect.” That community support is reflected in Weymouth’s track record as a competent host of provincial championships. “We ran provincials last year for 15U and everybody liked that tournament,” Mullen said. “And they hosted 13U a couple of years ago, before COVID, and (the Firebirds) won that year in peewee, which would be 13U. “They seem to like the job we do in Weymouth. Baseball Nova Scotia keeps picking our town. We try to do our best and make sure everybody has a good time.” Reaction to this year’s 18U tournament highlighted Weymouth’s popularity and its ability as a host community. “It was a busy weekend, but it was well done,” Mullen reported. “It was a good tournament. Everybody seemed to enjoy being there and they all seemed happy with the way things went with the tournament.”