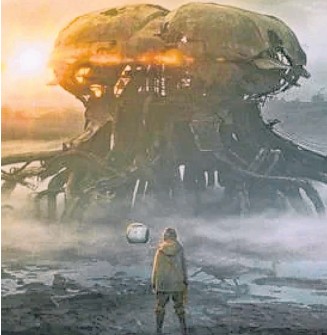 Extreme weather events have risen globally. In 2022, parts of the world, such as India, Pakistan and England witnessed heatwaves that killed many people. The effects of extreme weather like drought, famine and floods are harming the world’s most vulnerable people, including in the Global South in disproportionate ways. Climate change is increasing the frequency of extreme weather events. These are now described as unprecedented and expected to grow. Humans exploit the natural world and its resources, and the consequences are evident in climate change. While people have been able to control resource extraction in our global capitalist economy, extreme weather events make the natural world uncontrollable from a human perspective. The extractionist mindset treats the word as inert, lacking in agency. In the shadow of the climate crisis, a wave of speculative fiction, named the “new weird,” rethinks the role of agency and the natural world. It asks what it means to live in a world where everything is not an extractable resource — and where humans are not in control. OUR TIMES Scholars have named our current era the time of the Anthropocene. The Anthropocene stands for a geological age where human activity has become the biggest cause for geological change. Not everyone agrees on this name. To highlight the legacies of colonialism, capitalism and racism in this current epoch, some scholars have proposed the name plantationocene. A plantation mode of agriculture is premised on extracting the maximum from land and labour. To bring the role of capitalism to the forefront, others have proposed renaming the current age to capitalocene. Irrespective of the name, these terms capture how humans have treated the natural world as a resource to be exploited and controlled. How do we as a species engage with climate anxiety when faced with a world that is beyond our control? SPECULATIVE NARRATIVES New weird speculative narratives reimagine the natural world no longer as an inert background that serves as a canvas for action. The new weird mixes genres and has elements of science fiction, fantasy and even horror. The genre is also preoccupied with what we might think of as weird ecology. In these narratives, life forms that western thought has traditionally understood not to possess agency are granted it, giving rise to an eerie effect. Take for instance, the 2022 film Vesper, a LithuanianFrench-Belgian co-production (released in France as Vesper Chronicles). The movie opens with a note about its setting. The world has become dangerous because of a genetic engineering project gone awry; viruses have been released into the world. Viewers then see a seemingly calm woods. The camera moves closer to the trees and reveals that they possess sensory organs. Tentacles emerge from the ground. The protagonist, who knows the landscape, avoids these traps hidden in the calm landscape. Similarly, the 2021 South African film Gaia shows a forestry department employee get injured in a remote national park. She is found by a father and son who have been surviving in the park. The employee discovers that the forest is home to a species of fungus which infects the humans and consumes them. Viewers are introduced to visually appealing landscapes whose beauty is produced by elements that are beyond any human efforts to control them. ‘THE SHIMMER’ The 2018 American film, Annihilation, inspired by the novel by American author and literary critic Jeff VanderMeer, also features landscape that is eeriely powerful. The novel and film takes place in a special ecological zone named Area X, which is weird and alien. The film represents the separation between the ordinary world and an ecological anomaly through an iridescent boundary named “the shimmer.” A team of scientists sent to investigate the anomaly finds plants that look like human bodies. These eerie formations contain a mixture of different DNAs. Here again, a seemingly pristine landscape encroaches on the human body, operating under principles beyond human understanding or control. AGENCY OF THE WORLD In the above instances, the natural world capable of having effects beyond human control is a cause for concern. From a western humancentric worldview, a natural world that is not an inert resource, potentially awaiting extraction, is horrific. Contrary to this perspective, Indigenous cosmologies have long maintained that agency is not a uniquely human trait. Casting the natural world and land as resources effectively removes their agency. Even though extreme weather events show that a climate crisis is now unfolding, reporting about effects in the West sometimes stresses that the direst state of affairs will unfold in the future. However, scholars remind us that for some communities, apocalypse is not futuristic, it is now and has happened many times before. Speculative narratives can be a tool to draw attention to the inequalities of the status quo. They can also offer hints in imagining different futures, not reliant upon exploiting the natural world solely for human gain.