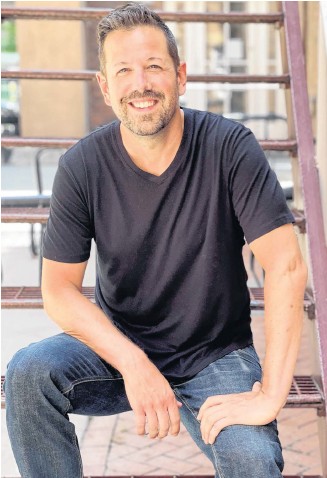 NEW GLASGOW – Comedian Peter Anthony is often asked about the pressures of performing at home, so of course that’s where this interview begins. Anthony, who’s performing Thursday, Dec. 1 at Glasgow Square, said it’s a paradox of more stress and more comfort doing a show in front of folks you know. “It’s a bit of a strange phenomenon whenever you perform in front of people that know you personally, but it also gives you a lot of advantages because you’re able to, not necessarily get away with more, but it’s certainly less of a walk to get them to know you. “You don’t have to do that initial thing where you’re trying to get yourself over to a bunch of strangers.” Not only is the Pictou native performing back home, but he’s also recording the show for his next comedy album. That fact brings an extra dimension to the performance. “It also gives me the opportunity to focus a lot on the kind of material I want to put out there. “In that regard it’s a lot of fun to figure out which jokes that I wrote are ones that I want to share with a bigger audience in terms of being recorded.” This means that fans will be treated to new material for a wider audience as well as Pictou County and Nova Scotia-focused jokes. “It will be all over the map and it will be the best of what I’ve got since the last time I recorded.” Anthony plans to let the crowd know that the tape will be rolling, and they are participants as much as fans. “I thought it might be fun to communicate that’s the objective here, so then the crowd knows that they’re a part of it as well. I thought it could be a neat experience.” It also allows Anthony a little leeway with presenting his material, too. “I think they will appreciate that I might have to do something if I throw up in the middle of one of my jokes, I might have to do a take-two,” he said in jest. He said fans are supportive here at home and doing this recording is something he wanted to do for a while because “it just makes sense.” There’s one thing he hopes doesn’t become a part of the show and that’s heckled comments from the crowd. “I'm just hoping that the crowd understands what’s going on. Come ready to laugh, just don’t come if you’re ready to heckle! We’ll explain it the night of the show.” Ian Black, who Anthony describes as a great comedian, will be the opening act. You can get your tickets here: https://www.showpass.com/peter-anthonydec Doors open at 7 p.m. and the fun gets underway at 8 p.m.