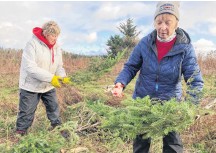 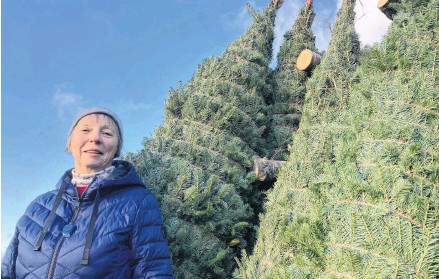 Ruth MacLeod has been growing Christmas trees on a Pictou County hill for half a century. Beyond conversations on the tasks of the day with Glenn Smeltzer, her lone employee of 25 years, for nine months of the year she plants, fertilizes, trims and cares for her balsam firs with a calm quiet as company. “These little legs have served me well,” said MacLeod, 70. The season of harvest has begun on MacLeod Christmas Tree Farm, where her balsam firs draw so many other lives up the winding, gravel Millstream Road to pass through her own. As a November chill set recently MacLeod and her sister, Patty Hudson, were trimming fir brush left behind in a field of stumps. Her sister-in-law, Shirley Rushton, was coming Tuesday from Ontario to help weave it into 200 wreaths. Her daughter, Ella MacLeod, and son-in-law, Brian Nickerson, were expected on the weekend. The trees destined for American living rooms were cut, graded, baled and waiting for trucks. The many hands that come to join Ruth each fall are preparing for the annual rush when the U-pick opens today, Nov. 24. Many of the thousand or more people who come in the weeks leading up to Christmas are descendants of the first customers who arrived back in 1972. “Oh, we were young, enthusiastic and full of energy,” said MacLeod. Ruth, from a logging South Shore family, met Jim MacLeod at a woodsmen’s competition in Shelburne. One thing led to another, and they bought the former Grant family farm on the Millstream Road. They logged the spruce that grew up in the pastures, had a family, built a house and started shearing the balsam firs that seeded in the cutovers. Trimming off the leading buds on the tips of the branches was a new development in the growing industry. The firs responded by sporting new buds further down the branches, making them less spindly. Tastes were evolving in the northeastern United States and the industry of individualists scattered across the expanse of this province was organizing and maturing. “I watched my father cut 15,000 trees in 12 days with an axe; I know it because I drug them out and saw them counted,” remembered Mike Keddy of his father, Jack, harvesting trees during the ’60s in New Ross. “I’ll tell you one thing: those men knew how to use an axe, and the axes were razor sharp.” Keddy serves as the unofficial historian of the 350 growers scattered around the province. Even the chainsaw Jim MacLeod brought with him to the lot was seen as a modern contrivance in an industry that spawned in the 1920s from subsistence farmers turning to the woodlots they’d cut for pulp and sawlogs a few years earlier to harvest young balsam firs that popped up. It was a handful of enterprising Americans who came after the world wars, buying up Christmas trees for export via ship to the Boston states, who began the long transformation into an export industry. “The trees were cash money at a time when there wasn’t any money,” said Keddy. For his first few years on his own lot, Keddy used an axe, too, one swift chop on each side bringing down a balsam fir. But with pruning and fertilizing came thicker trunks and more swings, so power saws replaced the single sharp blade. American servicemen stationed in the Caribbean and Latin America during the Cold War wanted the trees to remind them of Christmases back home. The local populations, mostly staunch Catholics, added the exotic-looking softwoods to already elaborate Christmas traditions. While the bases closed, the export of trees to Panama and the Caribbean continued to grow. As has the industry; about a million trees are in the process of being cut, graded and baled for export (60 per cent to the United states, 10 per cent across Canada and most of the rest to the Caribbean) from lots still owned and managed by rural individualists like Ruth MacLeod. Jim died in 1993. “I looked around and I said, ‘I need to at least try and make this work,’” she remembered of keeping the farm going that they’d built together. She’s more than managed that. On an old farm overlooking a lake named for a waterpowered sawmill that’s been gone for over a century, Ruth has been trying to take stock of her half-century of harvests. Of the generations (often three or more) of families who’ve kept coming back. And of the extended network of family and friends who have lent their time and their backs to making it work. But she’s really too busy to slow down right now. There are 1,635 trees to load on a truck, wreaths to make and a U-pick to get ready.