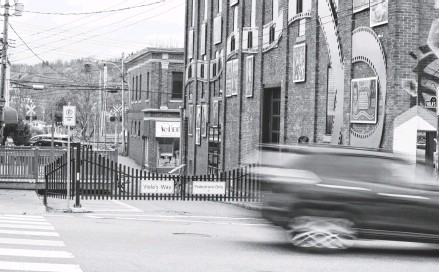 NEW GLASGOW – Viola's Way is roughly the same size as an NBA court and it's a space that is packed with potential. That message was delivered at a recent placemaking session held by the Town of New Glasgow and facilitated by Fathom Studio from Halifax. Placemaking is a collaborative process to shape public areas to maximize their value to the community and the people who use them. (FYI - A pro basketball court is 436 sq. meters while the downtown street is 440 sq. meters.) Participants at a pair of sessions held on two nights at Glasgow Square were tasked, through a series of four questions, to envision how this space and the nearby extension on Forbes Street, could be upgraded, changed, and renewed to maximize its value to the community. The questions were designed to generate responses from the groups with each successive question building upon the previous one. The discussion was led by Devin Segal, Director of Landscape Architecture, and Sujana Devabhuktuni, Landscape Architect, at Fathom Studio. “We do storytelling and create inclusive public spaces and try to marry those two,” Segal said. “We are here to listen. We are tasked with creating a project plan and helping represent your story and realize your vision.” The first question was: “What stories should be told in the space?” The two groups of citizens and town employees who were on hand came up with ideas as diverse as telling the history of the town, placing interpretive panels, and telling Viola’s story from the very beginning as it ebbed and flowed through time. The next question then asked: “How do you see yourself or your community using the space?” This drew answers such as incorporating it more into Art at Night and including a stage and PA system. Other answers such as adding lighting, plants, a CCTV system, a water feature and more benches, blended seamlessly into the next question, which was: “What amenities and features would you like to see in the space?” Here participants suggested things such as a bike rack, flowers, etchings in the sidewalk and a donor wall. The final question drew immediate and pretty much universal agreement. “Would you prefer the street to be open or closed to vehicular traffic.” Both groups said it should be closed and have a level surface from building to building with vehicle access only for emergencies and snow removal. Segal said the previous night’s session was just as energetic and filled with interesting and helpful feedback. Peter Douthwright, New Glasgow’s Director of Community Development, said Viola’s Way is a physical space but “it’s so much more than that.” He said “organic conversation” can help Fathom Design create a plan that can be used to eventually seek funding for revitalization of Viola’s Way. “This is the type of feedback and resonating voices we need,” he said.