Provincial championships this weekend in Westville 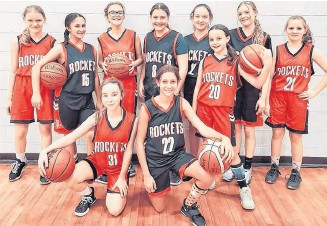 WESTVILLE - Exciting basketball action can be found this weekend (May 14 and May 15) at Northumberland High School, as the Alma Road school hosts the Nova Scotia Division 2 U-14 Girls Provincial tournament. Local fans will want to follow the Rockets which is a team made up of players from Pictou County and Truro and are affiliated with the Cole Harbour area. Their first game is on Saturday afternoon versus Acadia Minor. Tip-off is 1 p.m. The team is coached by Jackie Fitt, Andrew Barnhill, Travis Roy, and Robin Veinotte. “The team is very well rounded; they are defensively strong and organized,” said Fitt. “Over the past three years, coach Barnhill has developed the players to take pride in their work ethic and fundamentals. They are offensively threatening and hard working. The majority of the team has played together since U-12 and seven of the 10 will be returning for another season of U-14.” The team played in the Metro Basketball Association this season where they finished with the second-best record in league play. All eight teams participating in the provincials are members of the association. Fitt said she expects a competitive tournament. “All the teams are strong, and it really could go any which way,” she said. “We have played everyone in the tournament and three of our four losses this year have come from teams involved in this tournament.” She talked about the players very much looking forward to getting to play in a big event in, or at least near for the Colchester players, their home county. “These players have worked incredibly hard over the past three years and are so excited to have the opportunity to play in front of a hometown crowd, especially after the provincial tournaments did not happen last year,” she said. “Seven of these players were bronze medal winners at the U-12 Division 2 Provincial championships - the last time they were held - in 2020.” Action gets underway at 10 a.m. with the HRM-based Northwood Knights taking on the Tri-County Tigers from the East Hants area. For more on this weekend’s provincials, including a complete schedule, visit the Basketball Nova Scotia website (basketballnovascotia.ca) and click on the links for events and U-14 provincial championship.