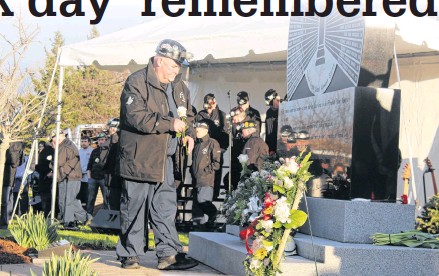 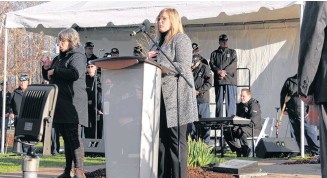 A large crowd gathered at Their Light Shall Always Shine Memorial Park, on May 9 to mark the 30th anniversary of the Westray Mine Disaster. The Men of the Deeps sang, speeches were given and wreaths were laid during the ceremony. Ken Neumann, Canadian national director of the United Steelworkers, spoke about how after 30 years, Canada still has a long way to go in regard to workplace safety despite the Westray Bill becoming law. “To date, there have been very few charges laid and even fewer convictions secured and jail sentences are even rarer. “This continues as we see year after year, around a thousand workers killed on the job in Canada every 12 months.” He said after the mine disaster happened, the United Steelworkers made a commitment to fight for change so another incident like Westray would never happen again. They continue to pressure law enforcement and justice departments to utilize the Westray Bill. When it came to the Westray Mine Disaster, no one was ever held accountable for these preventable deaths, he said. “The justice system failed those workers and everyone else impacted by the disaster,” says Neumann. Sean Fraser was also in attendance. The MP was seven-years-old when the disaster happened and recalled his elementary school class drawing pictures to support the families of the miners. “It is a hard thing for an entire community to grapple with at the same time,” says Fraser. “It wasn’t just the families who were grieving, the entire community was there with you thinking about you every step of the way,” With three decades gone by, he spoke about how some of the miners who died were younger than he is today. He called the event a beautiful tribute and concluded by saying he hopes those who died are able to rest in peace. On behalf of the province, Pictou West MLA Karla McFarlane said she was honoured to be in attendance in both grief and remembrance. She spoke about the morning of the event, and how many gathered at the Plymouth Fire Hall. “It’s an unfortunate truth that during dark times like these we are witnesses to the very best of people. “That dark day brought out the generosity, the kindness and the strength that Pictou County is known for,” says MacFarlane. She went on to say how the community will honour those who died by keeping each other safe at work and never forgetting what happened to those working in the Westray mine. “My wish is that you never ever feel alone in your grief. Please know that we are your friends and neighbours and we share in your sorrow.”