Study shows some of the secrets to happiness during retirement 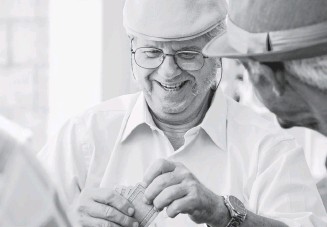 When we think about it – why aren’t all retired people happy? They don’t work or commute anymore. They have no deadlines, commitments, angry bosses, or backstabbing coworkers to deal with, and they can sleep in every day. To the rest of us still working, we can’t imagine why they wouldn’t be happy all the time. But it turns out, there are some retired Canadians that are indeed happier than others. So, let’s find out why and discuss how you too can be guaranteed retirement bliss. When we looked at the financial aspects of the happiest retirees, it was not that they had more money, but more that they viewed their money as a tool for their happiness. The happier retirees had no mortgage or consumer debt. They also stayed in the homes that they purchased and paid off while they were working. This is where it got very interesting to me. Turns out, many retirees that moved during the early years of retirement to “right-size” their life took on home renovations or made big purchase decisions and wound up with more debt than they bargained for; forcing them to eat into their retirement savings or carry a new mortgage that wasn’t anticipated. When it came to vacations (again please remember this study was done pre-COVID), the happiest retirees had taken two or three vacation every year, while the less happy retirees had one or none. SAVING, SPENDING, PLANNING This next discovery was something I didn’t expect: the happiest retirees in the survey were not lavish spenders and seemed to be right in the middle-class with their spending, especially on cars, clothing, and vacations. The unhappy retirees, on the other hand, were the opposite. This group had a lot more status symbol purchases and high-priced vehicles, with BMW being the most popular. Another thing that I found most interesting was that the happiest retirees had done a lot of planning over the years. They obviously were not leaving anything up to chance. Most had financial advisors and all had multiple sources of income in retirement (three to five sources funding retirement). The unhappy participants, as you would expect, did little to no planning for their future during their working years, with most starting just five years before retirement. This group invested without financial assistance, usually day-traded on their own, and all planned to rely on one or two sources of income, such as their pensions only. FIND A HOBBY When we look at the other facets of the happiest retirees, the study showed that this group had many personal hobbies. The happiest people had four to seven hobbies versus the most unhappy retirees who had fewer than three. So, what is a hobby? A hobby is a leisure pursuit, something that fulfills and defines you. This would be something that you think about, do often, and is absolutely one of the key traits that will ensure your happiness. You see, those retirees that had many core pursuits were statistically happier than those that retired with only one or two things they liked to do outside work. According to the research, many Canadians with no hobbies ended up with depression in retirement, claiming that they had never been depressed before retirement, but now without work, they felt they had lost the only identity and sense of purpose they had ever known. The number one hobby among happy retirees was volunteering, of which we all know there are endless options. Happier retirees tended to be very active and social, with daily exercise being a key factor as well. The happiest retirees were much more involved socially (and still are, virtually) prior to the pandemic. They joined clubs, played sports, attend fitness classes, volunteered, had part-time jobs, and were generally busy every day with activities. The unhappy in the study tended to prefer more solitary interests, such as, walking alone, hunting, and watching television. So, my ATML Readers, the take-away from this study is to Plan Your Life. I know we are all getting tired and discouraged with COVID, but remember, life is what you make it. Only you can make yourself happy, healthy, fit, slim, busy, wealthy, content, independent, prosperous… you get the idea! No matter where you are, no matter what is going on right now in your life, change it and mix it up this year. Find your own happiness equation and just do it! Good luck and best wishes, - Christine Ibbotson