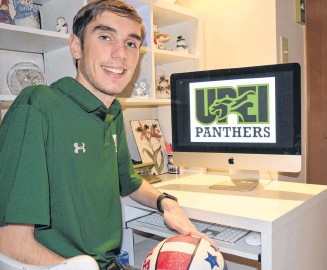 STELLARTON - When you talk with Pierre Aucoin about his role on the coaching staff of the UPEI Panthers men’s basketball team, you get the distinct impression he’s thrilled with what he’s doing. And who could blame him? After all, he gets a chance to combine two of his loves in basketball and sports stats. A first-year Bachelor of Science in analytics student from Stellarton, Aucoin is a statistics and video coach with the Panthers. He saw the job posting on Instagram and applied, not really thinking he had a serious chance as a freshman, but head coach Darrell Glenn interviewed him over Zoom and liked what he saw. A stats and video coach does a whole lot more than keep track of scoring, minutes on the floor, and shooting percentages, for example. Aucoin helps the coaches get the best out of the team as a unit. “I track player statistics during practices and games and report my findings to the coaches so they can figure out what is going well and what is not,” he says. “I also use film from previous games to create videos that are used as examples of areas of strength and areas that need improvement for individuals and for the whole team.” His contributions must be helping because the Panthers are currently 5-4, which is a far cry from the team that only won three games all season long back in 2019-2020. He occasionally helps with game stats for the women’s team as well and has also done stats for both UPEI basketball teams for the Atlantic University Sports website. His love of sports comes naturally, and it blossomed while playing both hockey and basketball and watching games on TV with his dad Guy. An interest in stats arose organically from that. “I was always interested in how they found the stats, and I wanted to do that as well. Having played basketball through the Pictou County Lightning program, I was always interested in the statistical part of the game. When participating in tournaments, looking at the different combinations of wins and losses to see if we would move on was a passion of mine. I enjoy stats because it gives a deeper and unbiased look at a team or player’s strengths and weaknesses.” Any sports fan will agree that stats reveal a lot about a player or team, but they don’t tell the whole story, and Aucoin says that’s a fair statement. He knows there’s more to success than just facts and figures. “I feel that the number of stats and its analysis is good for sports, but it should not be the only thing being looked at. Stats are absolutely a key part of seeing the strengths and weaknesses of a player and a team, but there are things statistics cannot show fully, such as leadership and hustle.” Every player, coach, agent, and fan knows that analytics and metrics play a significant role in decisions from drafting to matchups to who to play and when, especially at the professional level. It’s the best time to be entering this field, says Aucoin. “It is absolutely a great time to get into this kind of career. Thanks to the evolution of technology, there are so many different stats to track, each with their own unique purpose. Sports analytics is a field that has rapidly grown in the last decade. No longer do we only look at shots made and attempted as the main statistics to record.” He said working with the Panthers has allowed him to meet many people and exposed him to a career in this area. If the numbers are in his favour, is there a chance we could see him working with an NBA club or tracking numbers in the NHL? “Having a career in sports analytics is a dream of mine. Working with a professional basketball or hockey team in their statistical department would be a career that I would love.”