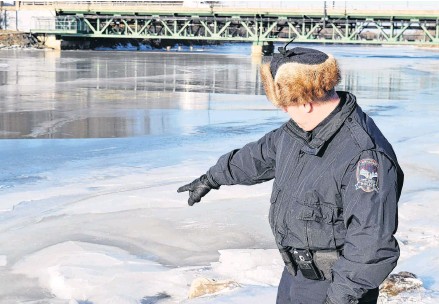 New Glasgow Fire Chief Ross White doesn’t trust the East River - at least not in winter. The East River is a tidal river, meaning the water rises and falls throughout the day and with the ebb and flow the saturation levels of salt and fresh water changes. “I don’t trust our river at all,” White says. “It’s constantly moving. It’s very unsafe and unstable. I never like seeing anyone thinking they can cross.” Const. Ken Macdonald said it wasn’t that long ago that there was a fatality on the river, where it appeared that someone thought they could walk across, but ended up falling through. “Not only do you have shifting in tides, but you also have fluctuations in temperatures,” Macdonald said. For instance just last week the temperatures was as high as 9 C with heavy rain in New Glagow but is predicted to drop as low as -20 this week. With the weather changes, the ice thickness can change rapidly. Salt run off from roads and bridges can also add to the unpredictability, he said. Unlike some areas in the province, where ice thickness on lakes is checked routinely, there is no official measurement that happens in New Glasgow. The Red Cross also says that people should pay attention to the colour of the ice. Clear blue ice is strongest. White opaque or snow ice is half as strong as blue ice. Opaque ice is formed by wet snow freezing on the ice. The organization states that grey-coloured ice is unsafe. The grayness indicates the presence of water. While first responders hope that people err on the side of safety and staff off the ice, they also do training each year in ice rescue techniques to be prepared. White says they haven’t had to rescue any people in recent years, but there have been calls where people were unsure if someone had fallen through the ice or not and also times when the fire department was on hand to help DNR if needed during animal rescues. White encourages people to let others know where they’re going to be and what time they expect to be back if they decide to go ice fishing or skating on a pond or lake. While these bodies of water are safer than the river, White said people should still be cautious. “You still have to watch around the edges because that’s where it’s not going to freeze as quickly. It’s constantly up against the shore.” If someone does fall through the ice and they can’t pull themselves up, White said it’s best for someone trying to help them to use a stick or rope to reach. People who are in the water generally get an adrenaline rush and in their rush to get out of the water, may accidentally pull the person rescuing them into the water by accident Once a person is out of the water, it’s important to get them dried and then warmed up slowly. “You have to be careful with hypothermia. Get them dry. Get them warm. Really keep an eye on them.” If you see someone go through the ice, but can’t get close enough to help them, White said call 911 and keep a visual eye on the spot they fell through, so first responders will know exactly where to start searching. It's recommended people follow Canadian Red Cross guidelines for ice thickness. Minimum ice thickness should be: • 15 cm for walking or skating alone • 20 cm for skating parties or games • 25 cm for snowmobiles.