Despite the growing market for organic produce, the increase in Atlantic consumers shopping for naturally-grown fruits and vegetables hasn't necessarily translated into sales for local farmers. In fact, some local farmers have seen doors close as larger grocers seek out suppliers who can provide year-round products at a consistent volume. Margie and Dave Blum have operated Elderflower Organic Farm in P.E.I. for over 20 years. Since 2000, the husband and wife team, who both grew up in farming families, have been selling at local farmers' markets and to other grocers. Margie notes that while organic products have seen an increase in demand, the percentage of that food grown locally hasn’t changed. “The market has grown, but it doesn't necessarily mean it's easier to sell stuff because there's a lot more imported organic,” says Margie. “And so, the percentage of organic food that people eat locally, a very small percentage of that is actually locally produced - maybe 10 per cent. I haven't heard the really current figures, but that's been the trend for a while.” In place of the locallysourced organic products that first served the buying public, organic farming has become a full-fledged industry with global reach. “Grocery stores used to take more local stuff at their back door, but that's become much more difficult like in a lot of cases,” says Margie. "You can't supply a single store or even just P.E.I., you have to be able to supply all of the stores. If you don't have that much volume, then they just can't." SKIPPING CERTIFICATION Blum started with doing medicinal plants and greenhouse production. Now, Elderflower Organic Farm mostly field crops and fruit for local grocers and farmers' markets, as well as straight from their farm and at a roadside stand. Evolving through the years has also meant foregoing organic certification. “When we started having more standardized certification around the world, it kind of opened the door for things to come from other places,” says Blum. "We were certified organic for about 15 years, and then certification also became less local. National standards that came into place made it unsustainable for small organic certification bodies, and then they became really large ones and I just didn't feel like participating. We left the certification at that point, but we still do all our same organic practices.” Blum is supportive of more healthy, organic products available to more people, but the growing market of organic shoppers is seeking year-round choice of the products they want readily available. “A lot of people don't eat necessarily in season. So, in season, they'll seek out local things, but then they want to eat the same things all year round. Rather than eating frozen strawberries, they buy organic strawberries from California in the winter.” LOCAL FARMING AS PART OF THE CLIMATE CHANGE SOLUTION In Nova Scotia, organic grower Two Beans or Not Two Beans Farm has just completed its first full year of selling to customers at local farmers' markets, including the Halifax Brewery Market and the Kentville Farmers' Market. After owner Eric Burton finished his undergrad in environmental studies and geography, he spent over a decade tree planting and working on organic farms before returning to Nova Scotia to start his own farming operations on Gaspereau Mountain in the Annapolis Valley. Stemming from his university studies on human-Earth impacts, Burton began his focus on farming as part of the solution to climate change “Farming is really the foundation of food production and food production is the foundation of any kind of community or society," says Burton. “With climate change getting so much attention in the headlines, it's nice to look at creative solutions that people can apply to their local community that, if enough people took those steps, we would create a lot more abundance and reduce our impact at same time.” To date, Two Beans has grown mostly varieties of fresh leafy greens like lettuce, kale, spinach and bok choy. Burton is also cultivating carrots, beets, daikon radish and turnips, as well as a greenhouse full of tomatoes, cucumbers, and bell peppers. "We focus on bio-intensive organic methods on a small scale,” explains Burton. “Just that basic shift in approach from decentralized models - smaller scale, less workers. It's a different way of looking at it, but that's kind of the way it was done in a lot of places, and still is the way in most of the world. That's more of an agricultural economy when people in the population are growing.” FOCUS ON LOCAL Like Elderflower in PEI, Burton’s focus on local buyers means that having his farm certified as organic is not a priority at the moment. “I don't plan on certifying, really, any time soon, because that year was my first full season but going to between two and four markets a week, it was a success for us this year," says Burton. As to the customers shopping at Halifax-area farmers' markets, Burton says that the perception of organic as a pricier option may be keeping some people from checking out local produce. “It's not more expensive to go buy from vegetables from farmers' markets. So that is kind of a myth,” says Burton. With the organic market continuing to grow, Burton also says that more and more young people are interested in taking up farming, but startup costs are one of the barriers keeping them out. “There's some grants available,” says Burton. “It's really a challenge for young people who are working on a limited budget to get started. I've had to be pretty creative just get off the ground here. Being open to community support has been essential for me. “And so, that's why I make space here for people to come and try it out for a few weeks." 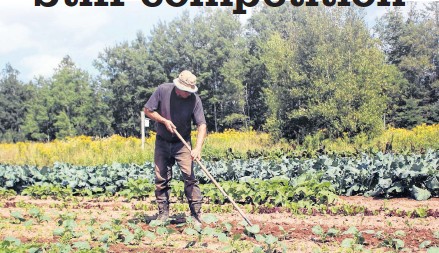 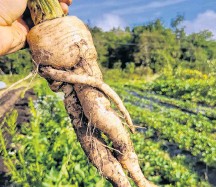 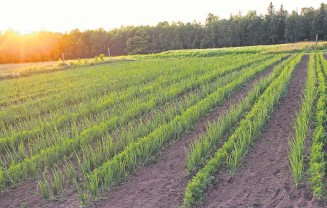