Hours upon hours of hard work has led to this moment. From head to toe, competitors have carved and crafted their bodies into a near-perfect image. In bodybuilding, it’s not just about the shape you're in. It's about everything. “Your hair, your makeup, the way your suit fits, the colour of your suit, the lipstick you choose to go with it, it's literally everything. It’s the whole package, it's the balance the symmetry,” says Norma Marshall. Going from a purely physical sport to one that had an element of appearance was the biggest leap Marshall had to make when she transitioned from boxing to competitive body-building. Hailing from Pictou County, Marshall was a nationally ranked competitive boxer, competing from ages 10 to 18. She took a couple of years off and returned to the sport, but a diagnosis of endometriosis made it hard to continue. This led her to weightlifting. “I always liked weightlifting. There’s a lot of other people in the area that were doing the sport, people in the gym that were doing it,” she says. Her boyfriend is into weightlifting as well, and from boxing, she already had a lot of basic building blocks. With boxing, she would have flare-ups from her endometriosis and there were times she would have to fight with severe cramping and taking blows to the stomach; it was all taxing on her body. Weightlifting gives her more flexibility and gives her more control over what she puts her body through. Her first body-building competition was in 2018. She had put weight on when she stopped boxing, so she decided to do a show, lose weight and see if she liked it. “That is when I was like 'OK, I really like this,' so then I kept going with it,” she says. She has still had to compete with endometriosis flare-ups, but she makes it work since she isn't exerting herself on stage. “You just take a couple of Ibuprofen and hope for the best. You can’t control it; it is going to happen regardless.” Marshall has now done four competitions. A couple of competitions she planned to attend were cancelled due to COVID, but this summer, she came fourth at the Atlantic Classic Championship in the Women's Wellness - Open Class A category. Then this month, she placed second in the same category at the Flex Lewis Canadian Classic Championships. “It was the best I’ve done, best I’ve looked and best I’ve felt going into it. We are hoping for another good experience in Toronto,” she says. Marshall will be competing for the first time outside Atlantic Canada in the Toronto Pro SuperShow next month. Marshall competes in the wellness division, which is a newer category at bodybuilding competitions. It looks for the same upperbody definition as the bikini division but with bigger legs and glutes. She hopes to place in the top 5 top or top 10 depending on how many girls are in her division. “That would be ideal; you never know what is going to happen,” she says. “Every time for me is just to bring a better package. Look better than last time and just make those small changes because it’s a sport of growing and learning. Every time you step on stage, you have to take something away from it.” She is getting back to low carb and lots of cardio as she gets ready for Toronto and is easing herself into training. She is also taking into account the judges notes from her last competition. When it comes to bodybuilding, she says you have to get a good support system. Get a coach that has your back and who is going to support you. Marshall works with Jonni Shreve, a pro bodybuilder and Mr. Canada 2017. He says when he learned Marshall was a former boxer, he was really excited. He always has great success training former high-level athletes turned bodybuilders and has watched her work ethic translate into the sport. “Her dedication is there, you know she goes through a couple of hurdles and she gets over them,” says Shreve. What sets Marshall apart from some of her other competitors, in Shreve’s opinion, is that she is the definition of a high-level athlete. There aren’t many former athletes of her calibre in body-building. With multiple shows under her belt, Shreve says Marshall has really grown mentally. “That is what I find the biggest from her is her mental maturity in the sport where things that probably would have sidetracked her before don’t even phase her anymore.” Marshall says for those interested in becoming bodybuilders, it's important to talk to your family. Tell them your goals and what you are doing. At family events, you will probably have to bring your own meals or possibly skip events that have food you can’t eat if you will be tempted to eat it. “There are a lot of sacrifices that go into bodybuilding,” she says. Marshall trains almost seven days a week. Some days it is just cardio, but she lifts three days on one day off. Yet, she says there is a sense of accomplishment when she is done and gets to step on stage, surrounded by the body-building community. “It’s very rewarding in the end; you just have to get there,” Marshall says. 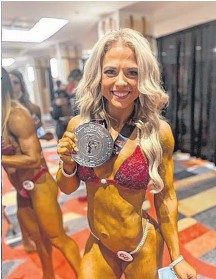 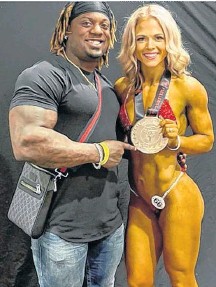