The physical Liberal Leadership convention has been cancelled, but the campaign will roll on amid a public-health emergency in Newfoundland and Labrador. Judy Morrow, party past-president, and John Samms, co-chair of the convention and AGM committee, announced the cancellation of the Liberal leadership convention, originally scheduled for May 8-9 at the St. John’s Convention Centre. “We recognize the seriousness of the COVID-19 pandemic. While, thankfully, the situation in Newfoundland and Labrador is presently more manageable than other places in the world, we know there are individuals in the province who are vulnerable. We encourage everyone to adhere to public-health guidelines,” said Morrow. There are no changes to the deadlines for the race. The last day to register as a supporter of the Liberal party and cast a vote in the race is April 4. The next leader of the Liberal party and next premier of the province will be announced by the party on May 9. “We have arranged that the entire process, inclusive of the annual general meeting, will be such that there is an elimination of personal contact,” said Samms. “What this means is that this campaign and convention, including all voting, will be entirely virtual, via online and telephone mechanisms.” CANDIDATES REACT “I’m certainly disappointed,” said John Abbott. “We had a good meeting this morning with the party executive, but it’s obvious the points we were making were not heard, or heard to the extent that they should be. Big picture for us is how this resonates with the people we’re trying to serve.” Abbott says while campaigning can continue digitally, the lack of an in-person campaign will hurt the process. “Technically, yes, that can be done, but one point to note is that in terms of the potential electors that the party knows right now, roughly a quarter of those can be reached through electronic means. The rest will have to be by phone,” said Abbott. “The Liberal party and politicians generally want to meet the people that they’re seeking their vote from. We’re doing a lot of visiting, coffee shops, church halls, those kinds of things. Obviously, we can’t do that. We need to suspend the race and stop the clock. Then, when we get a clear signal from the public-health officials that we can resume business, we do that.” Andrew Furey, Abbott’s opponent in the race, issued a statement on the matter on Wednesday morning. “My position is that the party should take all necessary steps to ensure public safety like postponing the AGM, as well as all public meetings by both candidates,” reads the statement. “Candidate and steering committee meetings should be conducted virtually daily to continue to monitor the situation and ensure the safety of all involved. Going forward my headquarters volunteers will be operating remotely.” Furey says the current voting model works in the current situation. “That means that people who sign up to support the party are able vote in the comfort and safety of their own homes during these uncertain times,” reads the statement. “This process has the potential to offer democracy at home.” LIBERAL PARTY PRESIDENT ISOLATING Liberal Party President John Allan is currently self-isolating amid the pandemic. He and Sarah Pinsent, co-chair of the Leadership convention committee, recently returned to the province after traveling out of the country. “I’m pleased to advise that they’re in good health and are self-isolating, consistent with the advice of public health officials,” said Morrow. david.maher@thetelegram.com @DavidMaherNL 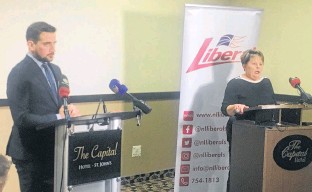