Good to be back

Sam Mattie is playing a key role for junior B Bulldogs 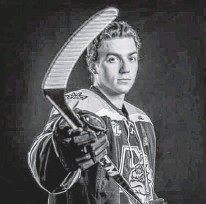 The opportunity to attend university and play hockey in the town he once called home is ideal for Sam Mattie. “It’s been really good; no complaints,” says Mattie. “It was a big change coming back out here but I’m so happy I made the decision to do it.” Mattie, 20, was born in Antigonish and moved to SaintLazare, Que., when he was four. He returned to Nova Scotia two years ago to attend St. Francis Xavier University where he is working towards a business degree. He is also a second-year forward for the Antigonish Bulldogs junior B hockey team. “Last year was the most fun I ever had playing hockey,” he says. “We had a really good team, and school was great.” Mattie is familiar with Antigonish and many of the people who live in the area. Nearly every summer during his childhood and youth, he would return to visit family, including his cousin Andrew Boyle – the current captain of the junior B Bulldogs. “Every summer pretty much since we moved we would come down and stay at my grandma's and he just lived down the road and I’d hang out with him, and he’s got two younger brothers, so when I came down I’d spend my time down here with them,” says Mattie. In 2018-19, Mattie played junior B hockey in Ontario for the Casselman Vikings while attending Carleton University in Ottawa part time. Looking for a change last season, he texted Boyle, who suggested he come to Antigonish where he could receive his education and continue playing at a competitive level. After a few conversations with his parents, Glenn and Joann – both of whom attended St. FX – Mattie applied to the university, was accepted, and soon after, made a seamless transition to the town and the school. “That was the best part about it; that even though I was moving away from home I’d go anywhere and I would definitely see somebody I knew.” Mattie is a high-scoring winger for the Bulldogs. Last season, he netted 13 goals and added 19 assists in 26 games to help his team finish first in the Nova Scotia Junior Hockey League’s regular season with a 25-6-1-0 record. Playoffs were halted because of the COVID-19 pandemic. This season, it’s been more of the same, as again the Bulldogs are a contender and Mattie is among the league’s top scorers. “He’s very smart; he’s extremely intelligent, which to me is one of the biggest attributes of a great hockey player,” Bulldogs coach Donnie Grant says of Mattie. “He’s got good speed but he’s got a heck of a shot as well. He really does have a little bit of everything and his release fools a lot of goalies.” Mattie, an alternate captain, plays on a line with Fearghus MacDonald – another one of the league’s top point-getters. “They really could both be playing at a higher level but their focus is school so that’s kind of the whole point of the junior B league is for those players that want to focus on school and just play some competitive hockey along the way, so we’re definitely lucky to have both of them.” COVID has thrown a wrench into scheduling in the NSJHL, however, a shortened regular season is expected to be completed by March 10. Playoffs in the Sid Rowe Division will consist of the fourth- and fifth-place teams playing a best-of-three qualifying round to determine who moves on to a divisional semifinal against the No. 1 seed. The second- and thirdplace teams will meet in the other semifinal.