PORT AUX BASQUES, N.L. — Seventy people attended the local World Day of Prayer service hosted by St. Michael’s Roman Catholic Church congregation at Wesley United Church in Port aux Basques on Friday, March 6. Representatives from congregations at St. James’ Anglican, St. Paul’s Anglican, The Salvation Army, Wesley United and St. Michael’s Roman Catholic churches read prayers of praise, a letter from Zimbabwe, prayer of confession, words of commitment and prayers of thanksgiving and intercession. World Day of Prayer is celebrated by Christians from over 170 countries who come together on a common day, usually the first Friday in March, to pray for peace and justice. It is run under the motto “Informed Prayer and Prayerful Action.” This year's program, Rise! Take Your Mat and Walk, was written by the World Day of Prayer Committee of Zimbabwe. Lt. Maurice Collins of the Salvation Army played the piano and led the people in singing hymns. “It was a beautiful service and I really enjoyed the singing,” said Phyllis Matthews, representative from St. Paul’s Anglican Church. Father Lee Lainey presented a very spiritual message which was consistent with the theme of the service. The church was decorated with physical items, symbols and words describing the heritage of Zimbabwe. The Wesley United Church UCW and the Salvation Army Ladies were the founders of the World Day of Prayer Service in the Port aux Basques area, hosting the first service in 1956. St. James’ Anglican Church joined in 1960, with St. Michael’s Roman Catholic Church in 1966 and St. Paul’s Anglican Church in 1982. “It is always a pleasure for St. Michael’s to host World Day of Prayer," said Dorothy Bragg, a member of the congregation. "We always have the full cooperation of the other churches in the Port aux Basques area. This year was no different. Great attendance, great participation, and great fellowship in the hall following the worship service." 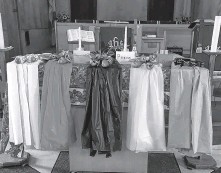 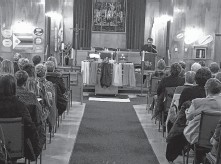