The fresh prince of parks and rec

Meet the new head of Amherst’s parks and green spaces 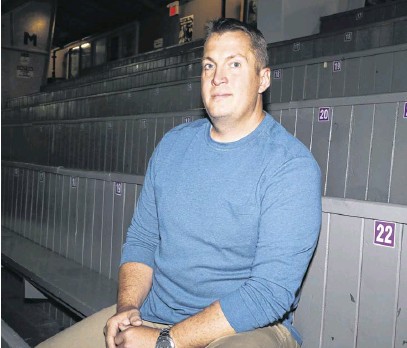 Amherst has a new person taking charge of the town’s abundant parks and green spaces. Longtime employee Matt Selig has been named the town’s parks and recreation foreman, a role that gives the 34-year-old a heightened responsibility. He will look after more than 60 green spaces under the town’s ownership as well as its seven parks. Not only that but the position also includes helping operate the Amherst Stadium and several other town facilities such as the Robb Centennial Complex. “Being here for as long as I have, I’ve done every job that our department looks after so I have that behind me,” says Selig about the new responsibilities. “And the guys seem to respect that (even though) it was a complete 180 from where I was before obviously.” Having started working for the town nearly 15 years ago as a seasonal employee, Selig has worn many hats since joining the municipality in 2009. In 2011, he was hired on full time where he looked after parks maintenance as well as inside the Amherst Stadium. Three years later, he would obtain his refrigeration class two certificate and, by 2015, Selig would be in charge as the chief engineer of the refrigeration plant at the stadium. In the meantime, Selig would also look after the fields during the baseball season from 2015 until this past summer. “The big difference for me is now I’m on the other side of the table, meaning I’m the one assigning the work and planning ahead as compared to just coming in, doing the job and going home,” notes Selig in a news release. Under his watch, Selig will lead close to 10 union employees, some of which were simply colleagues not so long ago. “(Now) I am basically in charge of making sure that they look after the day-to-day work all around town,” continues Selig. “All of our facilities, all of our parks, mowing, operating the ball field, running the stadium and keeping downtown cleaned up and looking great.” And Selig takes the role seriously as well. After all, as a longtime resident with a fiancé and four-year-old child, he understands the importance of green space, recreation and leisure time to the health of the town and its citizens. “People need a place to go and they need a safe, clean space to take their families or to walk their dogs,” says Selig, adding Amherst’s senior population also makes good use of the town’s three outdoor walking tracks year-round. “All are very well used, even in the winter so we try to keep them as clear as we can. If we didn’t have spaces and people had no place to go, be it seniors or youth as well, then it starts to cause issues.” Selig is particularly looking forward to overseeing and maintaining the town’s parks as well as shaping the future of Amherst’s green spaces. Having worked for the town for nearly half of his life, he says he is ready for the duty. “This position here offers me growth,” says the man who started at the bottom as a summer student and moved through every role in the department. “(Plus) I have a great team (and) we have a very strong work relationship. I believe together, we will make this department flourish and push forward.”