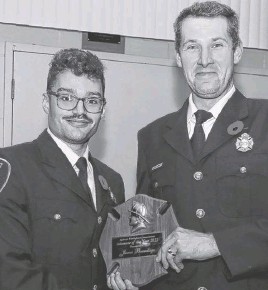 Firefighter James Brundage’s peers recognize his many contributions to the Amherst Fire Department. Brundage was recently chosen as the Amherst Fire Fighters’ Association’s volunteer of the year. Brundage was presented with the award by association president Alex Harrison during the department’s banquet, the first held in three years due to the COVID-19 pandemic. During the banquet, Mayor David Kogon called Brundage and his fellow firefighters heroes because they “head into danger when others flee from it.” “You place your own safety at risk in order to protect our community,” Kogon said in a news release. “You go beyond the call of duty to ensure that Amherst is truly a great place to live, work and play.” The mayor thanked firefighters for not only responding to emergencies, but for the outstanding volunteer work they do throughout the community. He also thanked the families of the firefighters for their unwavering support of their firefighter. “We can’t say thank you enough to the families for the sacrifices they make so their firefighter can serve,” Kogon said. Fire Chief Greg Jones also thanked the 56 members of the department for their dedication to the fire service. He noted the department responded to 758 calls since 2019. Jones praised the firefighters for how they have persevered throughout the pandemic. “The pandemic put our department into an environment that we never had to deal with before and hopefully will never have to deal with again,” the chief said. “I am very proud that we continued to push forward and adapted to the changing environment throughout the pandemic while maintaining a positive environment, leading by example and resiliency to change. “As the chief of this department, I take great pride in the way you, the members, tackle issues and situations, and plan and deliver services to the public, no matter when the call comes in or the situation that we face.” Jones also praised the Amherst Fire Fighters’ Ladies Auxiliary for their outstanding assistance to the department. Several other awards were handed out: Firefighter Alex Harrison: received the President’s Award, which is presented annually by the chief to the association president in recognition of his/her leadership and commitment during the operational calendar year. Firefighter Richard Hubley: received the Recruit of the Year Award, for a recruit who has completed the required in-house training and has shown commitment and dedication to the organization. Captain Vern Megeney and Firefighter Robert Sears: each received the best attendance award for having a perfect attendance during the past year. Firefighters Kurt Fawthrop, Chris Clark, Michel Poirier, Steven Wood and Tim Betts: were given the Aspiring Leader Award, which were selected by company officers and presented to a firefighter they recognized as being an inspiring leader. OTHER AWARDS Received basic firefighter certificates: Bryce Melvin, Corey Benjamin, Jacob Neufeld, Kaila Occomore, Mike Kizer, Richard Hubley Firefighter Donald Downey: five years of service Firefighters Chris Clark and Marty Furlong: 15 years of service Firefighter Steven Wood: 30 years of service Firefighter Robert Sears: 40 years of service Capt. David Rushton: 45 years of service In addition, service awards were given out to firefighters who have served with the Amherst Fire Department and at least one other fire department. They were presented to: James Brundage: 6.5 years Sharon White: 11.2 years Eric Graham: 12 years Chuck Delorme: 13 years Tim Betts: 27 years Stephen Chapman: 41.5 years