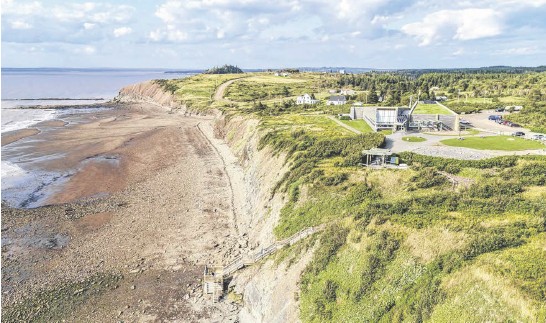 The international accolades continue for a significant Cumberland County landmark. The Joggins Fossil Cliffs has been added to the International Union of Geological Sciences’ list of First 100 Geological Heritage Sites in the world. The places featured on the list were chosen because of their unique geology and for their contributions to science. “It’s a really big deal,” said geologist John Calder, who was active in the campaign to have the Joggins Fossil Cliffs named a UNESCO World Heritage Site in 2008. “This is a very prestigious group to be part of. It’s a really big feather in Joggins’ cap.” Calder expects more sites to be added in the coming years. To be included in the first group is very special for an attraction that’s well known around the world but maybe not as much in Nova Scotia. “It really goes to emphasize how famous Joggins is around the world and how well known it is. There was no question whether it should be in this first 100,” Calder said. “Those of us who love Joggins and dedicated a lot of our lives working on it always wave the flag and do what we can. It’s not just for Joggins, but it’s for all those people, people like Don Reid, who gave so much of his life to sharing and promotion the Joggins story and Joggins’ place in the earth’s history.” Joggins is one of six Canadian sites to be included in the list of 100 unveiled in Spain. The others are Mistaken Point (named a World Heritage Site in 2016) and Gros Morne National Park in Newfoundland and Labrador, Quebec’s Eo-Archean Nuvvuagittuk Greenstone Belt, Dinosaur Provincial Park in Alberta and Burgess Shale in British Columbia. The complete list can be found at iugs_first_100_book_v2.pdf (iugs-geoheritage.org) The first 100 geological heritage sites were selected from 181 applications in 56 countries. Jade Atkins, director/curator of paleontology with the Joggins Fossil Institute, said the news is worth celebrating. “For me, this is more confirmation and recognition of just how special of a site we have here at Joggins Fossil Cliffs,” Atkins said. “This site has some of the best preservation of Pennsylvanian (Carboniferous) Coal Age fossils in the world, and it is the best example we have of Pennsylvanian terrestrial life and the Coal Age forest ecosystem.” Atkins said the centre is grateful to the selection committee and to Calder for nominating Joggins. “This news is especially welcome as it comes at a time when we are approaching and planning for our 15th anniversary celebrations.” Calder said he is honoured to have been part of the selection process. A retired senior geologist with the Nova Scotia government, Calder was approached by Spanish scientist and geologist Asier Hilario to participate as a Canadian representative. Hilario is familiar with the area as he was instrumental in the Cliffs of Fundy gaining world geopark status several years ago. Joggins is the world’s best example of Coal Age tropical forests and site of the oldest known reptiles. It includes iconic examples of this period of the earth’s history — a Coal Age forest ecosystem that gave rise to the coal deposits of Europe and North America and in which evolved the earliest reptiles and the first amniotes of the history of life. For this reason, scientists have been drawn to the cliffs for more than two centuries to ponder the record of standing fossil forests and life here and its importance in unravelling the evolution of reptiles continues today with continued discoveries along the cliffs due to erosion. They were studied by Sir Charles Lyell and Sir William Dawson in the mid-1800s and mentioned as the best example of the fossil record by Charles Darwin in his On the Origin of Species published in 1859. Cumberland County Mayor Murray Scott welcomed the announcement, adding he immediately thought of Don Reid, also known affectionately as the ‘Keeper of the Cliffs’ for many years. “It all started with Don walking the beach collecting rocks and stones and finding fossils ...,” said Scott. Reid died in November 2016 at his Joggins home. A member of the Order of Nova Scotia, he was 94 when he died. Reid had a lifelong passion for collecting fossils, which he gained from his father who worked in the Joggins coal mines for most of his life. In 1989, he opened the first fossil centre in his home that eventually grew into a log building on Main Street in Joggins. It was later supplanted by the Joggins Fossil Centre adjacent to the cliffs.