Atlantic Canadians share the stories behind the rocking chairs they own 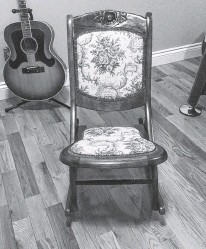 Have you ever looked at an antique rocking chair and wondered about all the children who were rocked in it? Rocking chairs are a staple in Atlantic Canadian households. They’ve rocked your children to sleep, are often placed beside the kitchen stove and, if you’re lucky, get passed down through the generations. FOLDING ROCKER Jean Price of Grand FallsWindsor, Newfoundland and Labrador has an antique folding rocking chair that has been in her possession for about 35 years. Price purchased it from a very close friend of her mother who was from Brigus, N.L. “The lady was a war bride originally from England who married a man from Brigus also,” she explained. “They moved to Grand Falls-Windsor and were our neighbours for at least 45 years. I loved the look of it and I thought it was quite unique.” Price is now selling it because she no longer has a use for it and is trying to downsize. A SPACE SAVER Price’s armless wooden rocker features a padded seat with tapestry upholstery fabric. Built in a Victoria design, the rocker has a carved floral motif on the crest of the seat. The rocker folds to a quarter moon shape and probably dates back to 1900 to 1920. The design originated in 1868 with American Adam Collignon, who designed it to save space for families who travelled across the country in covered wagons. Collignon’s design quickly became popular and, by the late 1800s, many companies were copying his folding rocking chair design. This style of folding rocker is sometimes also known as a collapsible sewing rocker. Sewing rockers would be armless to allow better freedom of movement and less interference with large pieces of fabric. GRANDMA’S ROCKING CHAIR Valerie Christoff of Halifax, Nova Scotia is selling an antique oak rocking chair that originally belonged to either her husband’s grandmother or great-grandmother. She said her husband remembers seeing the chair at one home or another in Toronto in the 1940s. Christoff believes the style of the chair is Jacobean, that the spiral vertical pieces in its construction are referred to as barley twists and estimates it was made in the early 1900s. She checked the underside of the rocker for a manufacturer’s identification but didn’t see any distinguishing marks. “My husband’s greatgrandmother lived in New England for a period, so perhaps it was made in the United States or in England,” she figured. BARLEY TWISTS In the late 1600s, a furniture technique that became popular was a type of wood turning that appeared particularly in the legs of English, French and Dutch furniture, which eventually became known as barley twists or barley sugar. This barley twist design was very popular in English furniture design and had various revivals, including the early 1800s, then again during the mid to late 1800s. However, it was not unusual for furniture makers in the late Victorian period to combine two or three style elements in one piece. TALENTED BEYOND MEASURE Jamie Collins lives in Lake Ainslie on Cape Breton Island and he is selling an antique wicker child-sized rocker that belonged to his maternal grandmother Alida. Collins said his nan was into recaning chairs and refinishing furniture. “She was thrifty and talented beyond measure,” he said. “If it was doable and came into my grandmother’s sights, it was done. At 80, she was pushing wheelbarrows of stones around.” He is unsure of how the child’s rocker came into his grandmother’s possession. Why is he selling it now? “I’ve got a new son, so I’m using the sales to try and update the house as it needs so much work.” SHAKER ROCKER Collins suspects the wood it is made of is maple as a lot of the furniture in Cape Breton was made of maple. The seat is cane material, which gives it a rustic charm, as does the chipped paint. If you look closely, you can see it was painted blue at one time. Research discovered this wee chair is a Shaker style rocker, which has been described as one of the more recognizable styles of rocking chairs. Shaker rockers have simple and attractive lines, are economical to build and, if built properly, they can be very comfortable.