‘It almost feels like we are back to normal’ 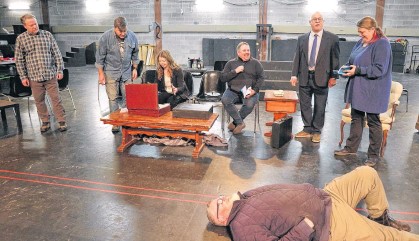 The Avion Players are excited to get back to what they do best. On Jan. 26, they will return to the Joseph R. Smallwood Arts and Culture Centre in Gander with a performance of Ray Cooney’s Funny Money, a hilarious farce starring Mackenzie Dove, Bert Peddle, Percy Farwell, Deana Stagg, Martin Jones, Celena Alcock, Jason Newman and Joe Goodyear. The troupe has been busy for several months, under the direction of David Newell and stage manager Lynn Sooley, preparing for this production. “Over the pandemic, because we weren’t able to put a stand-up play on stage because of social distancing and things like that, it was difficult,” Newell says, adding it was frustrating as they started to rehearse a couple of different plays when social distancing restrictions eased throughout the pandemic but got squashed because the pandemic again worsened. Throughout the pandemic they performed a couple socially distanced, static performances with actors standing at a microphone and delivering lines. “Now we are able to move around the stage and get back to what Avion does best,” Newell says. Although they have done a lot of plays by Ray Cooney, a British playwright known for his farce, they selected a play Avion has never done before. “This is my first time directing a play and I wanted it to be something uplifting and funny and Avion is known for their performances of comedy and farce,” Newell says, adding it’s being performed by seasoned, incredible actors including award-winning amateur actor Peddle who is back on stage after taking several years off from Avion; Alcock, a trained actor; and Jones, who spent time in Los Angeles as an actor. “The rest of the cast have experience on stage, so they are a joy to direct and we’ve had so many laughs.” Newell also credits Sooley who has taught him about directing. “Everyone knows that the stage manager is really the most important person in a production and she is one of the best,” Newell says. “We’re really excited and we can’t wait to get on stage.” The cast has been rehearing for several months averaging four times a week. Newell says they’ve been lucky the Gander International Airport Authority has allowed them to rehearse most of that time in their international lounge. Bishop’s Falls native Alcock has been part of the Avion Players since she moved to Gander in November 2018. “As soon as I was moving to Gander, I thought I need to find my theatre people and they have just been awesome,” Alcock says, adding she began acting in Grade 5, started with the Queen Street Dinner Theatre in Grand Falls-Windsor in Grade 10, and has a couple majors in business and theatre. She says her role in Funny Money is a detective “who’s not very good at their job.” “It’s really brilliantly written and I think we have a really great cast for the play as well,” Alcock says. She said she thinks everyone should come out to the performance for a great laugh. “Funny is in the title and there is good reason for that,” Alcock says. “They can also expect a lot of chaos and a lot of hilarious twists and turns. I think everyone needs a laugh after COVID so this is a good way to come out and get one.” The play will take place Jan. 26, at 8 p.m. Tickets are on sale at the Joseph R. Smallwood box office up to curtain time. “I can guarantee that people will laugh probably the most they’ve laughed in years,” Newell says. Once this play in in the books, Avion Players will start right back into rehearsals for their selection for the Newfoundland and Labrador Drama Festival which is slated to take place in Grand Falls-Windsor during the Easter break. “Immediately after we finish this production another director is going to take over and start rehearsals for our drama festival production,” Newell says. “It almost feels like we are back to normal.”