New Wes Valley officer, wife go above and beyond to help stranded couple 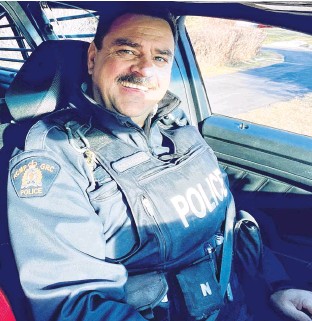 Denise Hayes was recovering from a day surgery in Grand Falls-Windsor when she found herself in an unprecedented situation. Denise and her husband Jerome were driving home from Gander to their home in Greenspond in the evening when they were suddenly trapped in a snowstorm. “The weather was fine,” she recalled when they left Gander on an evening late last year. “(About) an hour before we were to reach Greenspond, we were hit by a sudden snowstorm. It was quite a vicious storm, and it came out of nowhere.” Without visibility and limited cellphone coverage, they drove carefully and slowly, about 10 km/h and decided to make their way to a friend’s place overnight, which is closer than their home. However, they quickly found themselves off the road. The car sat at a 45-degree angle and, with Denise recovering from surgery, she had to put pressure on her muscles to maintain position. “It was … not conducive to someone who had that surgery,” she says. Their only hope was maybe her brother, Lyndon Burry, would be concerned they weren’t home and call RCMP on their behalf, or that a plow truck would pass by. Jerome thought about leaving the car to find help, but they decided it would be best not to leave the car. After about three and a half hours in the car, help appeared. Meanwhile, it was after 11 p.m. when the New Wes Valley RCMP detachment received a call from Denise’s brother to report them overdue to return home. THE RESCUE Const. Gilbert Hiscock was on duty that evening. He knew road conditions and visibility were next to nothing. “I knew that there was probably some issues there, either stuck or stranded or something like that,” he tells Central Wire. Hiscock geared up and made his way towards Greenspond. He frequently had to stop to let the wind blow through and follow the windrow the plow had left. He estimates about 15 to 20 cm of snow fell and winds probably reached over 80 km/h. After about an hour of driving, a distance that typically takes an estimated 15 minutes in clear conditions, he saw the Hayes’ car off the road. When the couple saw the flashing lights, they felt an immense sense of relief. “I don’t know who was more relieved, myself or my husband, because he was holding it in to make me feel better, but he was extremely concerned about my wellbeing,” says Denise. Hiscock and Jerome assisted Denise out of the car and took them into his vehicle. Hiscock decided to head back towards his own home in New Wes Valley, not wanting to chance heading to Greenspond. “I knew once I got back to my house that we had a bed here and food here and whatever they needed here and they would be comfortable,” he says. “So, that was the best course of action.” He contacted his wife Lisa to prepare a room for the couple. Visibility improved somewhat on the return drive and they made it back to Hiscock’s New Wes Valley home about 2 a.m. Once there, his wife “took over,” Hiscock says. “Whatever they wanted, if they wanted a meal, if they wanted tea - whatever they wanted, they were offered.” The couple stayed overnight before heading home to Greenspond the following morning. IMMENSE GRATITUDE Earlier this month, Const. Hiscock was presented the Commissioner’s Challenge Coin by the commanding officer in recognition of going above and beyond to assist the Hayes. After the rescue, Denise wanted to make sure Hiscock was honoured in some way. She contacted the RCMP to see if there was an award he could receive for outstanding service. “With the weather that night, that he did come looking for us, I had to be pulled out of the vehicle … and to take us back to his house was, indeed, above and beyond the call of duty,” she says. For Hiscock, he felt he hadn’t done anything extraordinary. “It was something that you should do and I think everyone probably in my situation probably would have done that night,” he says. Hiscock was, however, heartened to see an expression of positivity when, often, social media can highlight negativity. “Sometimes when that positivity comes in from people you deal with it just gives you that motivation to keep pushing on,” he says. Denise adds Hiscock’s wife deserves recognition as well, noting her willingness to open her home and prepare a room for two strangers. “The reception we received from his wife was just so kind and generous,” says Denise. Hiscock, too, was grateful for his wife’s support. “I have to give kudos to my wife because when I do stuff like this, she always stands behind me and never had any qualms about me doing something like that,” he says. “She gives her heart as well.” Denise doesn’t believe the incident hindered her recovery from surgery but suggests damage could have been done if someone had not appeared to rescue her and they had to stay in the car overnight. She felt she could not express enough thanks to both of the Hiscocks for everything they did for her and her husband. “Both of them are heroes,” she adds. Denise was also grateful to her brother for making the call.